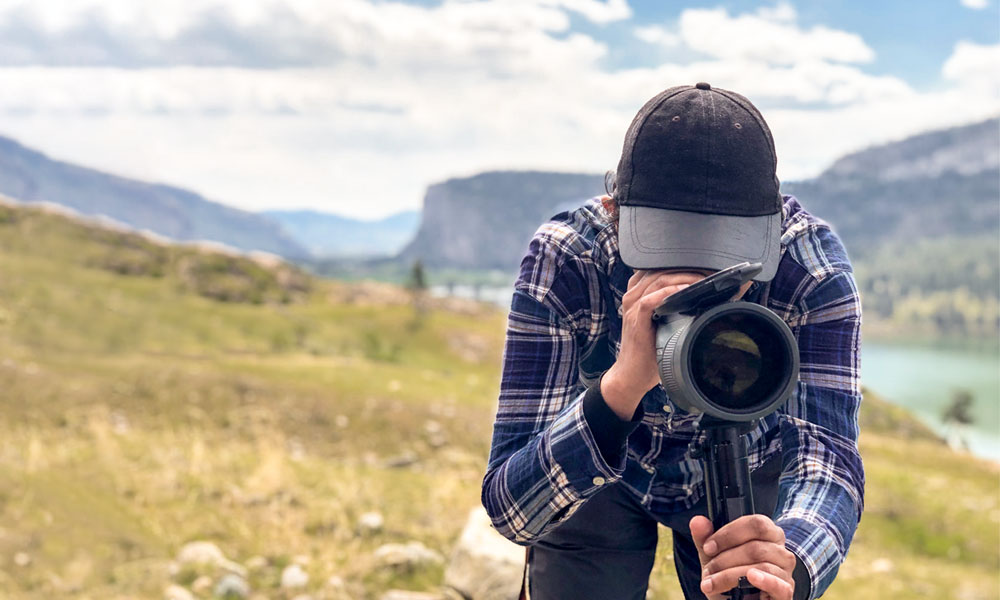 FROM A ROCKY OUTCROP IN THE FOREST SURROUNDING PENTICTON, members of the UBC Okanagan Wildlife Society gaze across a valley onto a steep sun-drenched slope, as government wildlife biologist Craig McLean details what he has spotted.

“If you look at that hillside you’ve got that big open rock face. At the top of it there’s a group of fir trees. There’s about eight trees in a group on the ridge and if you follow that to the right on the ground, she’s facing downhill and away from us and the sun is on her back.”

McLean effortlessly locates the bighorn sheep that from a distance looks just like the rocks she traverses. With McLean’s direction, the students here to help count the sheep, slowly make out the ewe’s camouflaged figure. 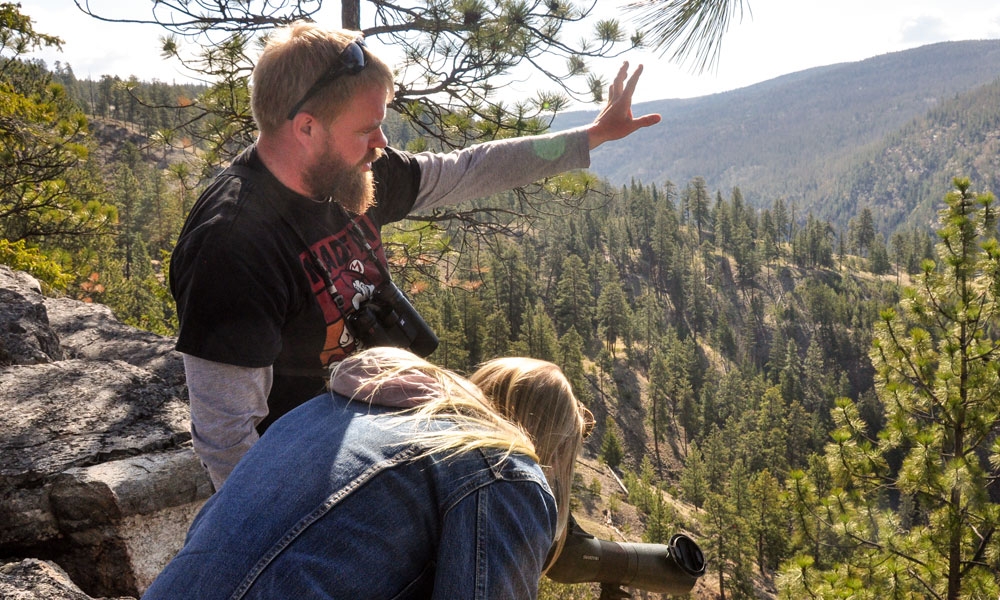 BC Fish and Wildlife biologist, Craig McLean, shows a student how to spot a bighorn sheep.

“There’s a pretty good chance she’s waiting to lamb out,” says McLean, as he looks through the spotting scope. He explains that at this time of year most of the ewes, the female bighorn sheep, have separated from their herds to find safe spots to give birth or — “lamb out.” 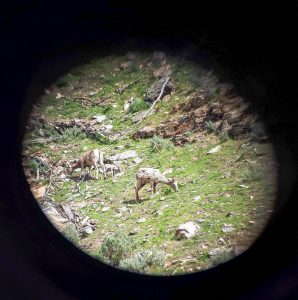 “As their lambs get bigger and stronger they’ll move out to prime feeding country and away from this escape terrain. Right now, she’s seeking really secure habitat so she’s not at risk of cougars or coyotes or wolves,” explains McLean, as he lets another keen student look through the spotting scope directed at the steep slopes.

Each April, the UBCO Chapter of The Wildlife Society sets out for the annual bighorn sheep survey. Their important work aims to gauge the rate of growth of the Okanagan’s sheep population.

The UBCO branch of the international society was started four years ago by two biology students who wanted to cultivate more hands-on, fieldwork experiences for their peers.

Today, the group regularly provides students with opportunities to volunteer and connect with other wildlife enthusiasts and working biologists. 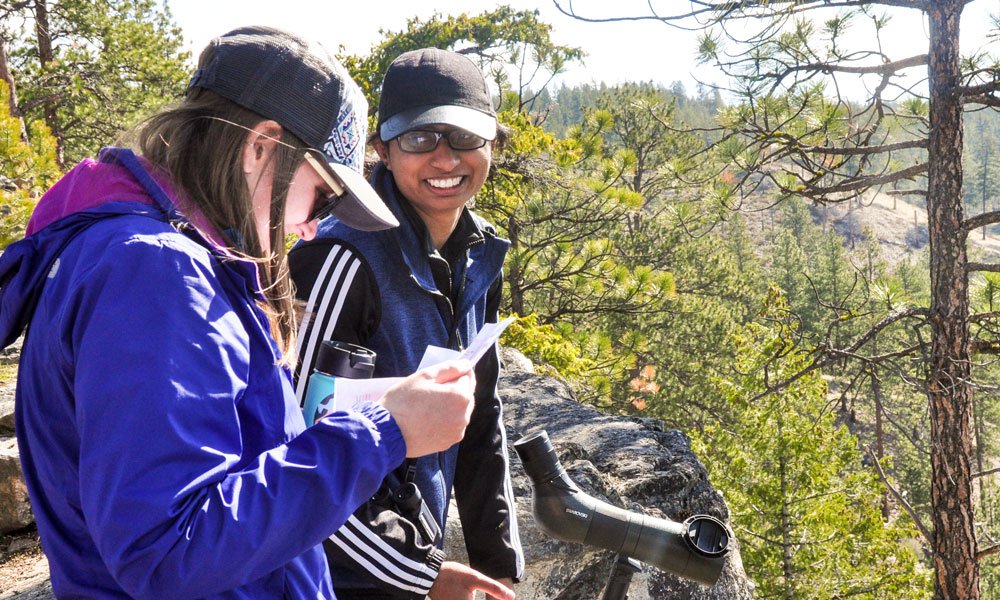 Majid and a team of UBCO students assist wildlife biologists with the bighorn sheep count.

Sultana Majid is a master’s student working in UBCO’s Wildlife Restoration Ecology (WiRE) lab, headed by Assistant Professor of Biology Adam Ford. The WiRE lab not only studies but addresses the impact of human activity on the interactions of large predators — wolves, bears and cougars — and their prey — deer, elk and sheep.

Working closely with government biologists, Ford and his students are playing a key role in the conservation and restoration of Canadian animal populations. As Ford says, he wants to ensure a Canadian coin isn’t the only place we find a caribou.

Majid’s passion for restoration ecology is evidenced by her focussed attention in the field, where government biologists are relying on her to keep track of the sheep count. As she carefully makes notes, she explains that her interest in wildlife began with a love for those classic public service announcements she’d see on TV as a child: Hinterland Who’s Who.

“I was interested in the charismatic species, big cats and carnivores, and was really good at reciting all the facts about animals.”

In junior high school, Majid began to understand how many animals were at imminent risk of extinction and decided she would make it her mission not only to learn about them — but to save them. 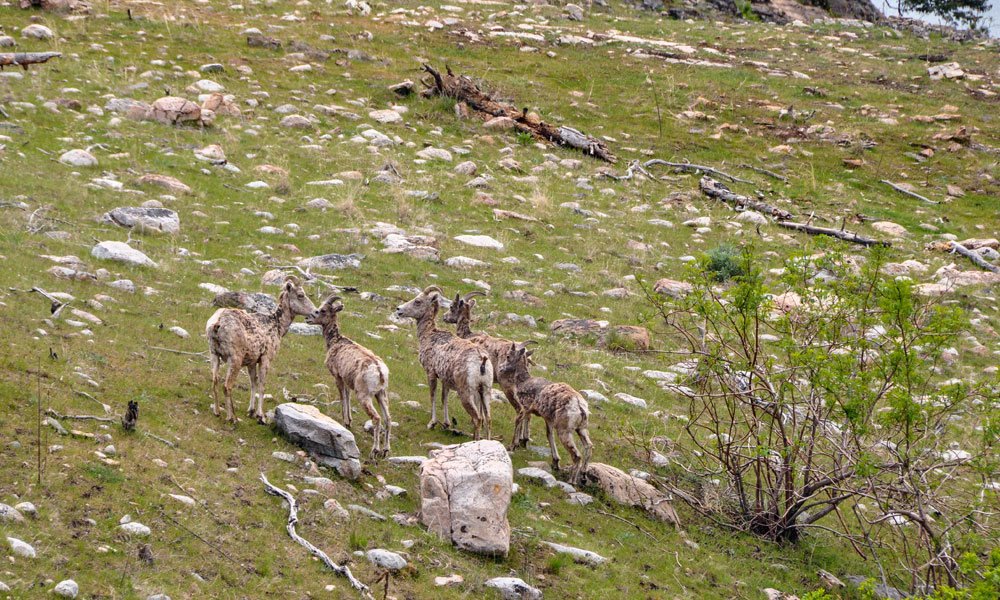 Majid’s master’s project recently received funding from the Natural Sciences and Engineering Research Council of Canada (NSERC). Her research is also being supported by a Mitacs Accelerate Internship through the non-profit Wild Sheep Society of BC.

Majid’s spatial ecology study of mite-infected sheep in the Okanagan collaborates with government biologists to understand the effects of mites on the bighorn sheep population. Ford says he is excited to see how Majid’s project will generate a deeper understanding of why sheep populations are in decline.

To conduct the study, the government collared 90 sheep to gather data. Since 2015, they have collected information on two separate herds: those infected by the mites on the east side of Highway 97 and the uninfected on the west side of the highway.

The data is extensive and that’s where Majid’s expertise in Geographical Information Systems (GIS) is helping make sense of the mysterious mite issue they hypothesize is the underlying cause of a decline in populations. 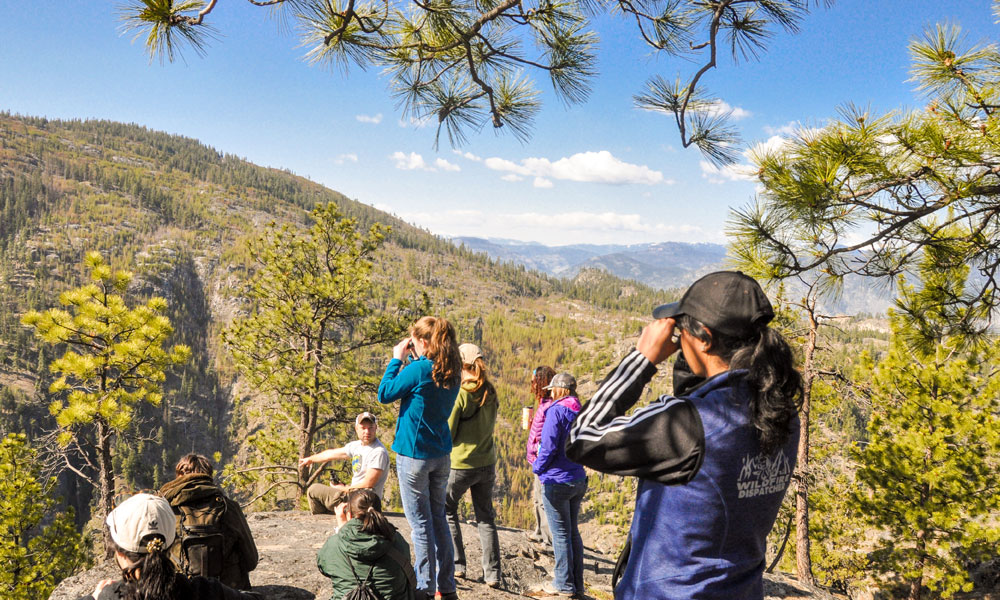 “A lot of science is isolated and goes nowhere unless you have scientists on the ground who can act on the results of the research,” says Majid, who is using the government-collected data to create spatial analysis computer models that simulate sheep and infection movement patterns.

From the models, researchers will be able to understand more about risk factors for the infected animals, possibly how they are becoming infected and the impact on sheep population growth.

“They don’t really know exactly where the mites come from but they have a few ideas,” explains Majid. “Either a ram that travelled from an infected area in the US or possibly a domesticated animal that was a carrier came into contact with the sheep.”

Whatever the origin, Majid’s research is helping scientists better understand the infestation and determine steps to help protect the dwindling population of bighorn sheep. 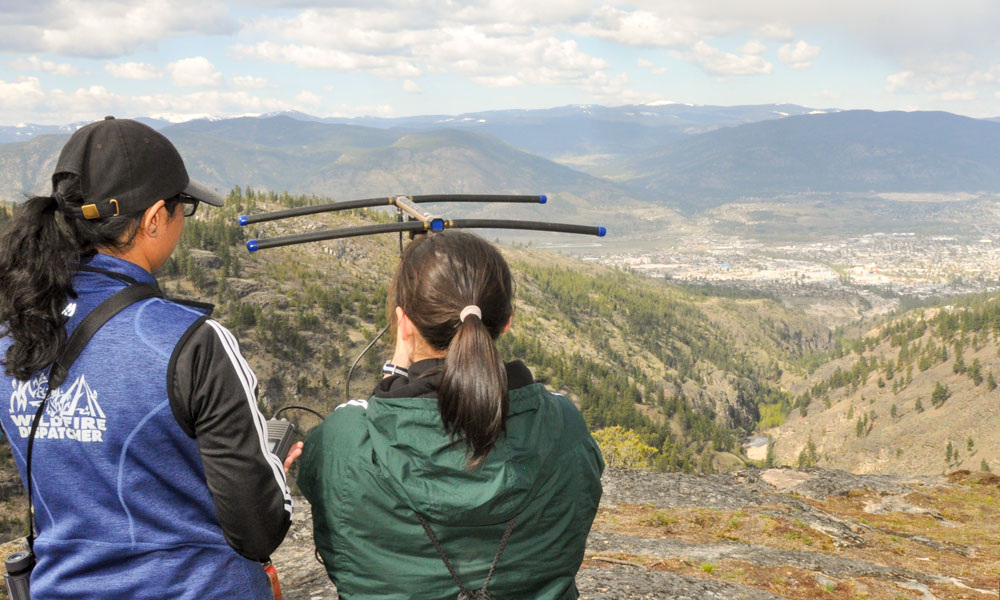 Majid demonstrates how to use a VHF tracking device to locate a collared sheep.

Majid first met Ford while completing upper-level courses in GIS at the University of Calgary. Ford delivered a seminar about his research on predator-prey dynamics, and Majid was sparked by his passion and knowledge of restoration ecology.

Knowing Ford was looking for graduate students with spatial analysis skills, Majid found work as a wildfire dispatcher where she was able to gain invaluable GIS experience.

When Ford contacted Majid about master’s research and the bighorn sheep project, she was ready.

While her knowledge in spatial analysis was crucial to securing her current position, being in the field with biologists has been key to gaining both experience and contacts.

McLean agrees: “I always say this to all the undergrads: Don’t hesitate to do outreach. I consistently use this guy as an example,” he says motioning to TJ Gooliaff, who found full-time work as a government wildlife biologist through contacts and experience he gained as a student at UBCO. 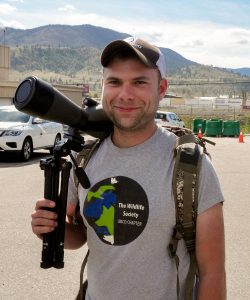 UBCO alum TJ Gooliaff secured a job as a biologist with the BC Fish and Wildlife branch straight out of his master’s degree.

As the annual sheep survey comes to a close, McLean addresses the group, sharing tips on how to find more fieldwork experiences.

His encouraging words are not lost on the students and several are asking how soon they can get out again. Everyone in the group agrees that this is exactly the type of experience they need to augment their studies.

While it was difficult to spot the sheep at this time of year when most of the ewes were seeking refuge to “lamb out,” McLean says the annual UBCO Wildlife Society survey was a success. Despite a slow start, the final count was 27 ewes, eight yearlings, two new lambs and one young ram.

Back in the lab, Majid demonstrates how she analyses the data gathered on the bighorn sheep, loading a digital map of their terrain on the computer. It shows different colored dots for the collared mite-infested and non-infested sheep. Currently developing a risk mapping model for exposure to the mites, Majid says the increased mortality in the infected populations appears to be due to higher cougar predations, though it’s still to be determined if there is a link between infection and predation.

There is a lot more work to do before any conclusions or solutions are created for the mite-infested sheep, says Majid, who will continue until the summer of 2020 with the bighorn sheep project.

Beyond that, Majid knows her path is clear. For years to come she plans to focus on preserving the future of the animals from the Hinterland Who’s Who that inspired her younger self.