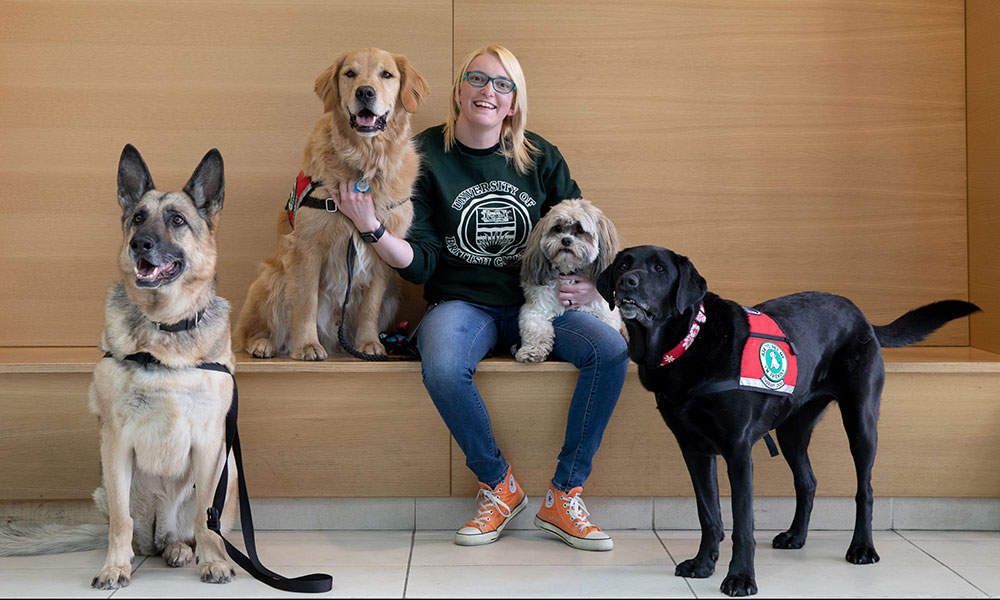 ALMOST EVERY FRIDAY AFTERNOON from September to April, a buzz of energy can be felt throughout the lower level of the Engineering, Management and Education building on UBC Okanagan’s campus.

At the hub of the excitement is a non-conspicuous room; a classroom by day and by late afternoon a space for Building Academic Retention through K-9s (B.A.R.K.) activities. Founded by Dr. John-Tyler Binfet, associate professor in the Okanagan School of Education, the B.A.R.K. program brings together university students, trained therapy dogs and handlers in an effort to reduce stress, combat homesickness and foster interpersonal connections.

Chatter and laughter fill the air as university students tell B.A.R.K. volunteers and handlers about their day, schoolwork or anything else on their mind while enjoying some canine contact.

“I typically start to get ready for a session about two hours before it begins,” says Green. “Ticking off checklists, ensuring the dogs have everything they need, their mats are clean, and that we have our paperwork in order for the student survey.”

Green will also pick up various treats, like granola bars, berries, or donuts on her way to campus — noting the importance of keeping their volunteers’ energy up and showing appreciation as many come straight from class. While the team begins their set up of the room, moving tables and chairs and setting up paperwork, Green uses the opportunity to check in with volunteers on a personal level.

“Our B.A.R.K. team is like a close-knit family,” she says. “Many of our volunteers are also students, so it’s important for us to know how they’re doing, how classes are going, or if there’s something we can do to help them — like writing a reference letter or mentoring them in areas to expand their skills.”

In addition to the social-emotional wellbeing aspects of B.A.R.K. sessions, the program offers a unique opportunity for student connections. As many students in their first year tend to mingle with more people in the same faculty, the sessions provide a place for students to make connections across all programs, faculties and even years.

“We work and engage with a diverse group of people. At a drop-in you’ll see a 17-year-old student and a volunteer handler in their 60s building this beautiful bond,” says Green with a smile. She gestures to a young student laughing and talking with one of B.A.R.K.’s more seasoned volunteers as a golden retriever nuzzles its way onto the student’s lap, tail wagging.

“I think for students, it can be so valuable to have someone who’s not a parent be a positive influence in your life,” Green explains. “We tend to stick with people who are similar to us, whether that’s our own age or faculty, but I think it’s so important to spend time with others and share knowledge, experiences or perspectives.”

At the room’s entrance, a pair of smiling volunteers are asking students to indicate their stress level on a thermometer — known as a “temperature check.” Over the course of a 90-minute session, a little more than 100 students will visit the lab on average. Students are welcome to stay for as long as they like, and typically stay for 30 to 45 minutes. When students leave, they complete a post-session check to measure their stress reduction.

Green rounds the bustling room to fill water bowls and check in with handlers. Sessions will have around 15 dogs of various breeds and sizes soaking up love in the form of belly rubs and behind-the-ear scratches from attendees, while B.A.R.K. handlers trained in the art of conversation will chat with the students.

“Our handlers understand that they aren’t there to fix students’ problems, but rather offer a listening ear and redirect students to services on campus if necessary,” explains Green. “The rounds offer a chance to ensure that the handlers are equipped with what they need to succeed, including more information about a conversation topic.”

In the corner of the room, a student can be heard telling a volunteer about their dog back home — and how much they miss them. As a fast-growing campus, UBC Okanagan is increasingly attracting students from across the world and the transition from their hometown to Kelowna can be challenging.

Green understands what it feels like to be far from home. Growing up in Hatch Warren, Hampshire, England, she had her sights on UBC’s Vancouver campus for university, but was a little concerned about moving to a big city.

“My high-school graduating class was only 29 students,” she explains. “But fortunately, my dad had a doctoral student working with him in England who was from BC and she told me about the Okanagan campus.” 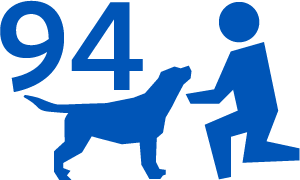 Average number of participants per session 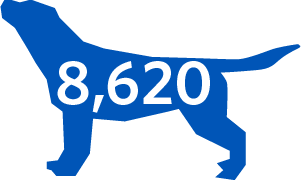 In 2011, Green and her parents took a tour of the campus; from the moment she saw the sweeping mountain views and the spectacular glistening of Okanagan Lake, she knew Kelowna was the place for her. But, as with many students, that didn’t make the move any easier.

“Being away from your family can be really hard. I remember coming to campus after my first visit back to England, and it felt like my focus was still in Hatch Warren. I was here, but many of my friends and all of my family were there. It was an emotional time and although I knew I loved this school, it felt like something was missing.”

A chance meeting between classes led to Green’s future at B.A.R.K. As Green was making her way back to her residence she noticed Frances, a mixed breed rescue dog sitting patiently by Dr. Binfet as he spoke to a student.

“Instantly, I connected to Frances,” Green recounts with a smile. She made her way over to greet Frances and began talking with Dr. Binfet. “He asked how I was doing in school and if I ever felt homesick or stressed, to which my response was a resounding yes. Then he told me that he was starting a pilot program as part of a research study. He was looking for students to come every Friday for six weeks to a session.”

The study was a natural fit for Green as she was pursuing her undergraduate degree in psychology, had Fridays available, and had an interest in animal-assisted therapy. The B.A.R.K. program had a humble start in 2012, reaching 60 students with five student volunteers and 12 therapy dogs with their handlers.

After a successful trial, the program continued to grow and so did Green’s involvement. She became a passionate volunteer participating in a variety of roles, including photographer and research assistant.

That passion, plus some encouragement from Dr. Binfet and her undergraduate honours supervisor Dr. Carolyn Szostak, ultimately led Green to pursue her Master of Arts in Education following her psychology degree.

“As professors, we have a responsibility to help students see the potential they don’t yet see in themselves,” says Dr. Binfet. “Freya is hard-working, insightful, super intuitive and personable. I could see she had all the qualities that would help her excel in an advanced degree.” 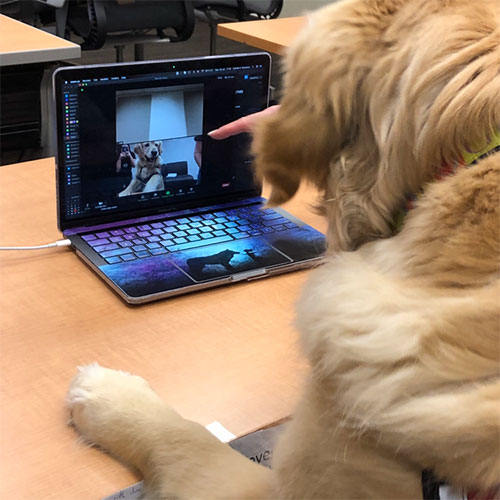 Dash, a golden retriever, participates in a virtual B.A.R.K. session.

However, when UBCO’s campus closed in March 2020 and all in-person activities came to a halt due to COVID-19, B.A.R.K. sessions were temporarily put on hold. Knowing the importance of stress reduction and mental wellbeing for students during that time, it didn’t take long for the B.A.R.K. team to begin discussing how they could transition their sessions online.

“We always knew B.A.R.K. was a popular program on campus, but we didn’t realize just how popular it was until people couldn’t access it,” says Dr. Binfet. “UBC is an innovative place that welcomes new research and the way we’ve tried to be innovative is to respond virtually. We want to meet the needs of kids who are seeking to reduce their stress through a connection with dogs.”

The team has hosted a total of 37 online sessions with 17 dog and handler teams that engaged with more than 400 students. Four of the sessions took place live over Zoom including Exam Jam. The other 33 were part of a virtual canine therapy study and included a mix of live and recorded sessions. While the sessions don’t have the physical canine snuggles associated with a B.A.R.K. drop-in, they still provide an opportunity for human and furry-friend connections during an unprecedented time.

One project that has also seen positive results is B.A.R.K.’s partnership with Kelowna’s RCMP detachment.

“I’d long been interested in animal-assisted therapy, even before my time with B.A.R.K. So, when there were discussions about a pilot program between B.A.R.K. and the RCMP, it all clicked for me,” Green explains. 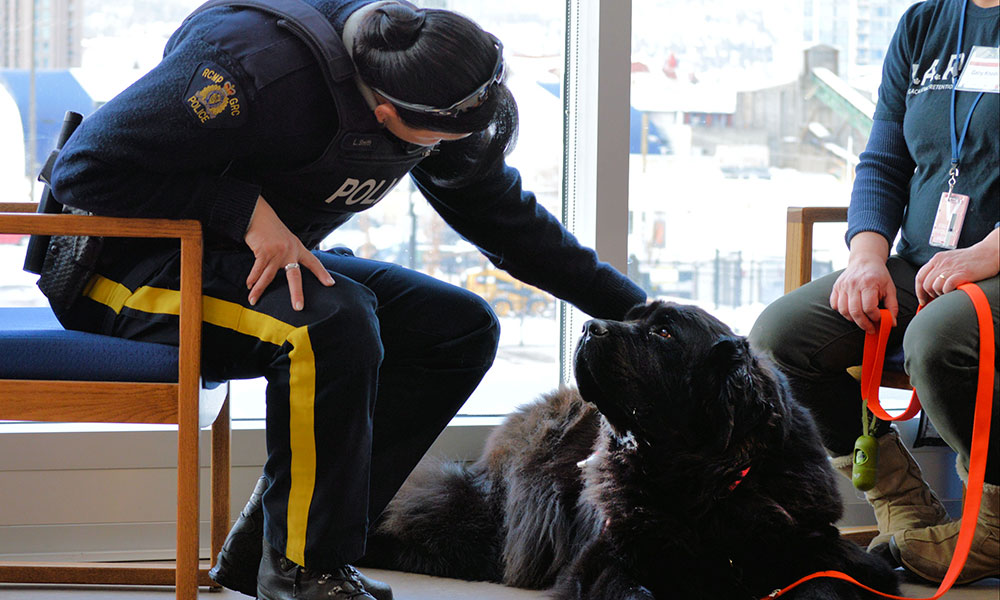 Emmi, a Newfoundland, sits with an RCMP officer.

Law enforcement officers and staff are known to experience elevated workplace stress, largely due to their increased exposure to traumatic incidents and unique working environments. These officers can also be reluctant in seeking help and participating in wellbeing programs, so initiatives are increasingly becoming incorporated into the day-to-day work routine of employees. The pilot program saw seven therapy dog and handler teams visit the Kelowna detachment, allowing both city employees and RCMP members to spend time with therapy dogs to reduce their stress.

Two-hundred and fifty-one employees made use of the pilot and, on average, visitors stayed with the dogs for slightly less than 11 minutes. For Green’s thesis, she interviewed participants to explore their experiences of workplace stress and the B.A.R.K. program within the detachment. While some may have found sitting with law enforcement officers and asking them questions to be intimidating, it was a natural fit for Green. She came from a family filled with first-responders and medical professionals, including her now-late aunt, who was an RCMP volunteer.

“This study was the first of its kind and we found that across all participants, significant reductions in stress were identified,” says Green. “Findings from this study will contribute to the body of research attesting to the benefits of spending time with therapy dogs.” 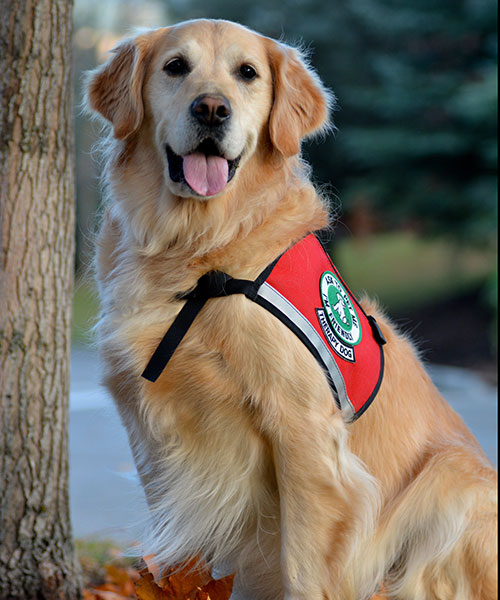 Green finalized her thesis in 2020 and dedicated it to her original therapy dog, Niki, a happy and lovable golden retriever. Green was assigned to Niki and her handler Emma in the pilot study and Green credits them with helping her through a challenging time.

“Freya is an example of a student who came to B.A.R.K. in her first year and just never left,” says Dr. Binfet with a smile. “UBC Okanagan is a place where we care about our students and because we’re a smaller campus, we can connect with them in a way that truly enhances the student experience. In this case, it led Freya to a career.”

What makes B.A.R.K. so special is something that can be hard to pin down, but Green has an idea.

“We’re not afraid to be creative and innovative — to try new and different things,” says Green. “We’re constantly evolving and changing and that’s what’s so exciting to be a part of.”