SALT-INFUSED WAVES EBB AND FLOW ALONG THE SHORES of Hartley Bay on B.C.’s northern coast. A world away, the air hangs heavy as temperatures soar above 36 degrees Celsius in the Punjab village of Rurka Kalan.

The sights and sounds are almost as opposite as the parts of the world on which two UBCO teacher candidates stood.

For four weeks, Alyssa Pembleton and Andrea Stinson each embarked on their own unique educational journey as part of their Community Field Experience (or CFE). It’s during these placements that Bachelor of Education students have an opportunity to experience teaching and learning in a different context while forging new community connections.

Pembleton was one of eight teacher candidates that went to Hartley Bay and Haida Gwaii. Nearly every day of their trip, the teacher candidates visited a new school, often travelling 200-plus kilometres. Candidates experienced a small school environment in Hartley Bay and visited elementary and secondary schools in Haida Gwaii, including a Band school in Masset and the Skidegate Haida Immersion Program.

Hartley Bay, home to the Gitga’at First Nation, is a remote village only accessible by boat or float plane.

“It was difficult because you want to stay longer and build connections,” says Pembleton as she reflected upon the short time in each school. “As someone who has a professional love for students and teaching, you get a little bit attached and you want to stay.”

Hartley Bay, home to the Gitga’at First Nation, is a village only accessible by boat or float plane, located at the mouth of Douglas Channel about 630 kilometres north of Vancouver and 145 kilometres south of Prince Rupert. In the community of 200 people, the school is currently comprised of 32 students ranging from Kindergarten to Grade 12.

Historically, Hartley Bay students in higher grades would have to leave the community and go to school in Prince Rupert, approximately a four-hour ferry ride away. With the school now offering a connected classroom, where subject-specialist teachers video-conference in, students are able to stay in their community.

Pembleton says the all-ages model of the school creates a unique culture that reinforces a sense of community among students.

“What was really different about this school was the sense of respect, patience and love with one another among the different grades. There were only four teachers so students would be grouped and you would see Kindergarten to Grade 7 working together in a small space. You would see the respect, care and love from the older grades to the younger grades.”

In between the whirlwind school visits, Pembleton and other teacher candidates enjoyed the hospitality of their host community. The warm welcome included an invitation to participate in local activities.

“We were honoured to be invited to visit Kiel — the Gitga’at First Nation’s sacred seasonal harvesting camp — and participated in the seaweed and sea cucumber harvest, and halibut fishing. I am grateful for the opportunity we were given to experience a variety of different delicacies. It was really eye-opening. It’s these outside teaching moments…that make you think about shifting your mindset and using your place differently.” These experiences helped the UBCO students understand how vital the connection to community is particularly for those who live in Hartley Bay and remote parts of the province.

The secluded locale and peaceful atmosphere also gave Pembleton the opportunity for self-reflection that she hadn’t initially expected.

“I would make me-time to go and reflect on what I had seen or done…a major highlight was being able to feel things that I hadn’t felt before.”

An ocean away in Rurka Kalan, India, Andrea Stinson had immersed herself in planning and leading programs and activities related to physical literacy, wellness and play. Stinson was one of the 15 UBC students participating in the Sport for Development India: Empowering Children through Sport and Play program, offered through UBC Go Global.

Other teacher candidates and Human Kinetics students took part in the immersive, service-learning course, which is delivered in partnership with the local non-profit organization Youth for Change (YFC). The program was a natural fit for Stinson, who completed an undergraduate degree in human kinetics before starting her education degree.

“We’d plan sport for development sessions with the YFC staff and we’d cover some topics that wouldn’t necessarily be taught in schools like looking at health topics or disease prevention — things that we might not think of in North America.”

One of Stinson’s sessions was about preventing the spread of communicable diseases for students from Kindergarten to Grade 7.

“We would go over what a communicable disease was and how to prevent them, and then we would play tag games, but put a spin on it so being tagged was like being bitten by a mosquito.”

But what Stinson most looked forward to each day was coaching the girls’ soccer team in the evening — a team that was only established in 2015 when girls in the area were granted permission to play soccer.

During the trip, Stinson noticed boys were often outside playing whereas girls were often helping inside the home. The observation wasn’t lost on her. As a female UBCO Heat soccer player, Stinson channelled her passion for soccer and teaching into the almost-daily coaching sessions as she trained and encouraged the girls.

“Being able to work with the same team and getting to know all the girls on the team was a definite highlight,” says Stinson. “Towards the end, we visited four of the girls’ houses. Getting to know them and seeing how happy they are and then seeing their houses…they live with so little. It just solidified that you can’t make assumptions.” 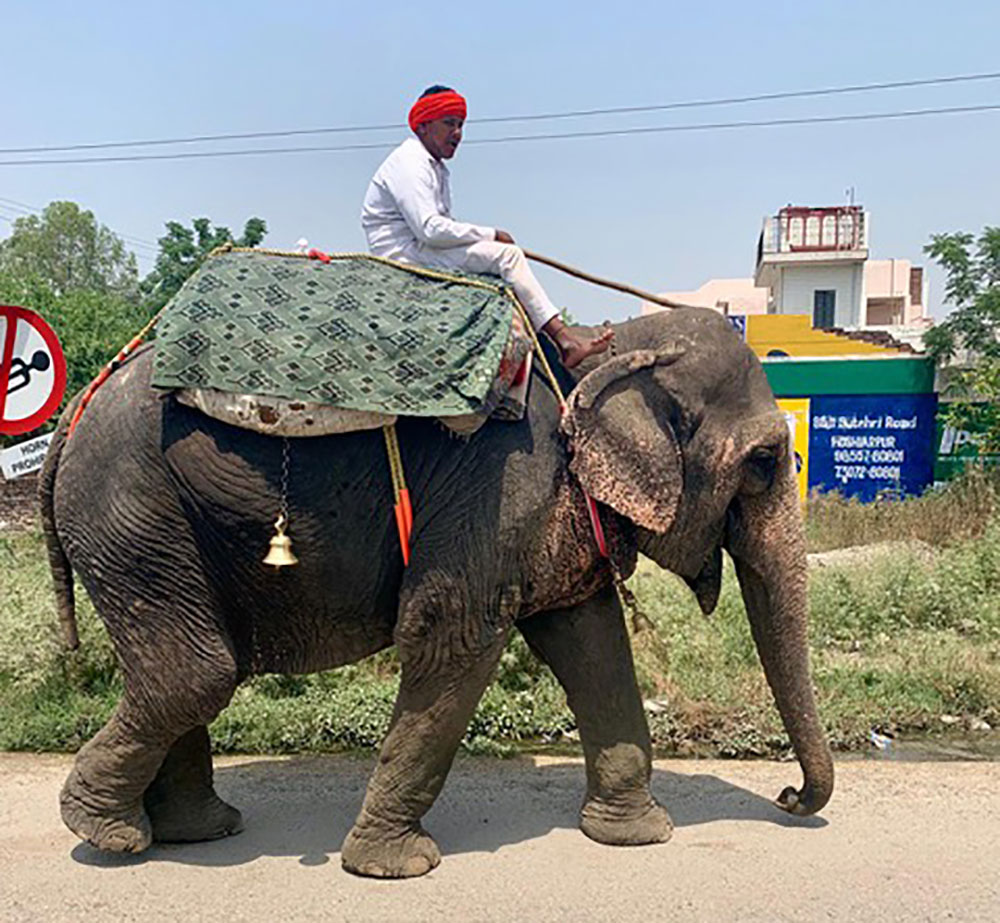 “They live with their grandparents, and uncles and aunts. When we met we were basically all crammed into someone’s bedroom. There were eight of us and ten of their family, and they were all so happy to have us.”

Adding to the adventure of their overseas trip, the UBC students in India were able to experience two somewhat rare occurrences.

“Every five years there is an election. And with that election, there are two ‘dry days’ when the whole town is shut down. We walked around and we were the only ones out on the street.”

The group also travelled to McLeod Ganj, Dharamsala, where students and faculty had the unique opportunity to see the 14th Dalai Lama teaching at the Main Tibetan Temple.

“Seeing the Dalai Lama was incredible because we had no idea that he was there teaching for those two days,” says Stinson. “It was just amazing!”

In addition, UBC students were able to spend their weekends travelling, enjoying the beauty of India’s countryside near the Himalayas and being awestruck by the Taj Mahal in Delhi. Education students embarked on several excursions to temples and landscapes around India.

When teacher candidates return from their Community Field Experience, they share their insights, experiences and “aha” moments at a symposium. Each candidate reflects upon how the experience will influence their future teaching practice. The exposure to different cultures, regions and ideas is life-changing.

“What I really got from the experience was the importance of context,” says Stinson. “We have our curriculum here [in B.C.] and we learn how to implement it, but you can’t necessarily implement it that way until you know the environment, the context and the students.”

For Pembleton, the experience has shaped her perspective of community and identity. “Building that community in my classroom will be an important first step and will pave the way to being able to explore identity. I want to provide opportunities for my students to constantly be reminded of their strength and worth.”

For other Bachelor of Education students about to embark on their own journeys, both Pembleton and Stinson recommend being flexible and unbiased.

“Be open-minded and go with the flow,” says Stinson. “You’d think you have a plan, but then two minutes before implementing the plan things would change. Be adaptable.”