An academic grounding in the Humanities involves an impassioned learning about human culture that extends deep into literature, art, music, history and philosophy. 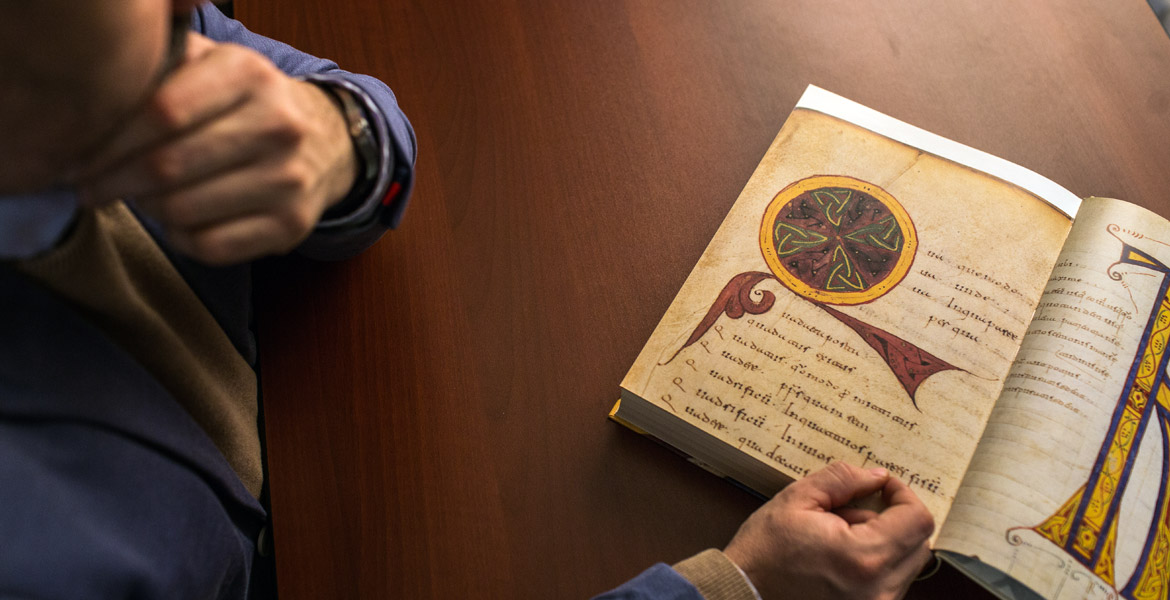 YOU’RE SITTING IN ENGLISH CLASS, listening to your favourite professor talking about a novel that you really enjoy. There’s an essay due in two weeks, and a mid-year exam coming up. But what’s really on your mind is a nagging question: How can something I love so much, something that I’m actually pretty good at, translate into a job or a career after graduation?

In addition to graduate degree programs and teacher’s college, UBC graduates from the humanities have gone on to careers in financial services, management, law, medicine, politics, construction, multi-media communications, and print and broadcast journalism. That is a partial list.

“Study what you love. Succeed in what you study. All of the rest will follow.”

While studying Shakespeare, Michel Foucault, Georgia O’Keefe, and Judith Butler, you’re busy developing your inventory of transferable, job-ready skills that employers in all kinds of industry all across the world want to see.

“Study what you love. Succeed in what you study. All of the rest will follow,” says Bryce Traister, Dean of the Faculty of Creative and Critical Studies (FCCS).

“It may take awhile, and you may make some lattes along the way, but that isn’t the fault of your degree choice. It just means you haven’t gotten there yet.”

Cultural Symbioses: The complex relation between religion and culture

Francisco Peña’s research sometimes makes him seem as much archeologist as teacher of world literatures and Spanish literature. 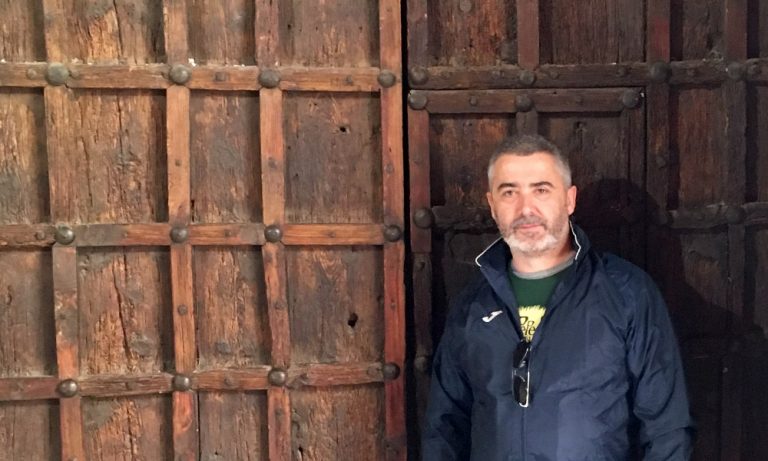 As an associate professor­­ in the department of Critical Studies, Peña explores wide-ranging and interdisciplinary work that involves literary, biblical and religious studies, and the history of ideas.

He’s also the organizer of a multidisciplinary research project titled “The Confluence of Religious Cultures in Medieval Spanish Historiography”—a new, unfolding resource for an innovative study of the Middle Ages.

The project reflects the importance of the critical edition, study and translation into English of General e Grand Estoria (General Estoria), the most expansive 13th-century book written in Spanish.

Commissioned by King Alfonso X of Castile, a.k.a., “el Sabio” (the Wise), the book was compiled by various contributors from different major religions, writing history together. The resulting publication is the first, and only, version of the Bible in which Christian, Jewish, Islamic, and apocryphal interpretations are accepted.

“People who specialize in different fields communicating and working together mirrors the way this book was originally written.”

“The book was written in Spanish, not Latin, which for the time was very revolutionary,” Peña says. “This is a pioneering venture as this text has never been translated into any other language.”

Divided into six parts, the General e Grand Estoria narrates human history, from creation to year zero, including the biblical and non-biblical past, and the Jewish and non-Jewish past.

International scholars working on this project include Dr. Turza from Fundación San Millán (Spain); Guadalupe González from the University of Montreal; Yasmine Beale and David Navarro from the University of Texas; Derek Carr from UBC Vancouver; and Constance Crompton from the University of Ottawa. Among their specialties are Medieval Studies, Digital Media, Hispanic Studies, Jewish Studies, Arabic Studies, Religious Studies, Linguistics, Latin and Classics. The team of researchers includes undergraduate and graduate students, working together to understand the reality that goes beyond the book: the interaction of different religions.

“The idea of people who specialize in different fields communicating and working together is also an important part of the project—it mirrors the way this book was originally written.”

Graduate student Cole Mash is living out his dream, and adding new marvels to the mix, as well.

“In writing and books, I’m fulfilling my passion to an extent I never thought possible,” he says.

Cole completed a double major in English and Creative Writing in the spring of 2014, started a master’s degree in Interdisciplinary Graduate Studies the following September, and will be starting his PhD at Simon Fraser University in fall 2018.

“I’m fulfilling my passion to an extent I never thought possible.” 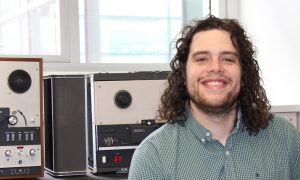 “My time at UBC Okanagan was so valuable because of the people there,” he says. “The people matter most.”

In addition to his impressive body of scholarly work, grant proposals and experience as an English instructor at Okanagan College, Mash plays a big role in the Okanagan art scene as a co-organizer of the Kelowna Poetry Slam and Inspired Word Café, for which he hosts a local TV cable show.

Living out his dream and writing his own script.

Reel to Real: the AMP Lab

Karis Shearer jumped on the opportunity to work in a faculty whose structure reflects what she is actively researching—the relationship between creativity and criticality, via poetry in Canada. Today, she’s making past knowledge available again in the present, providing ways to study aural forms of Canadian poetry, and helping build new pedagogies in literary studies. 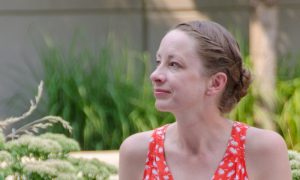 Shearer, an Assistant Professor in English and Director of the AMP Lab at UBC’s Okanagan campus, loves “the surprise” of the archives, and how they can reframe our contemporary practice.

“We are at a point where historical media is starting to disintegrate, and we may lose this historical audio,” says Shearer.

“I am interested in digitizing the material and thinking about how to make it available for research and general access, developing an interface where you can interact with the digitized audio, to make it searchable, to provide context.”

The digitization of archival recordings allows a whole range of new critical documents to join the conversation around Canadian poetry: researchers will be able to engage with the audio as well as with transcripts that can be read and searched.

“Having this new material available for study will provoke new insights into the kinds of conversations that were taking place between poets, teachers and the community in the past.”

Research Studio for Spaces and Things

Art isn’t a joke with a punchline or a puzzle to be solved. It’s a question with many answers—none of which are necessarily right.

That philosophy is what guides Assistant Professor Samuel Roy-Bois as he mentors Visual Arts students at UBC’s Okanagan campus.

“I like art when it is in the shape of a question and there are possible answers and interpretations but there is no one final interpretation that is unquestionable,” he says.

Roy-Bois is the Director of the Research Studio for Spaces and Things (RSST), a studio on campus that provides a platform for artistic research in the creative world.

“I wanted to create a space that was not well defined, so there would be nothing that would inform the kind of work to be done in the space,” he says.

“By creating a space that has very little specificity in terms of what you should be doing in there, this opens the door to a broader creative process.”

“I like art when it is in the shape of a question and there are possible answers and interpretations but there is no one final interpretation that is unquestionable.”

The RSST is available for students and faculty in the Visual Arts program to use to generate conversations and projects and create a greater sense of connection between the people who are using the space to create and critique creative works and to exchange and develop new ideas.

Cultural activist David Jefferess inspires people to think differently about what it means to make a difference in the world. Even if it means “unlearning.” 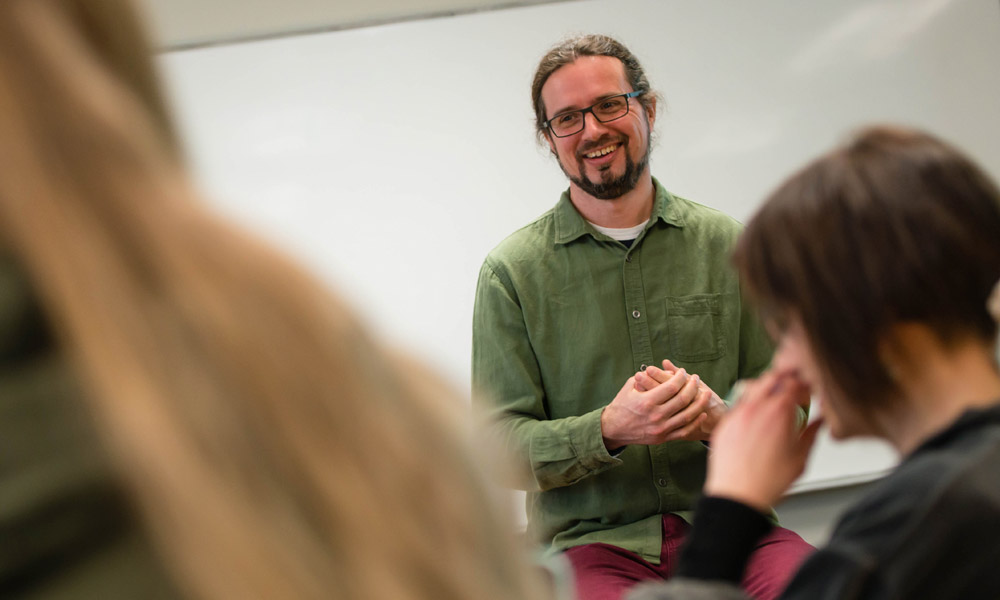 As an Associate Professor of Cultural Studies, his research focuses on the study of humanitarianism and international development, on planetary inter-connections and understanding the relationships that produce inequality.

Jefferess is interested in looking at why the idea of “helping” has become the prominent way of addressing poverty, especially since the development model has not been successful, and global inequality is increasing.

Through his involvement with community partners, Jefferess gives opportunities to his students to learn about contemporary culture and develop practical skills in teamwork and socially engaged research.

“What is exciting to me,” he says, “is the idea of ‘unlearning.’ To live in the Okanagan means having to understand Canada’s ongoing history of colonialism—it means unlearning a lot of the assumptions that I grew up with about Canadian identity, about my own racial privilege.”

Art History Through an African Lens

Associate Professor Suzanne ­­­Gott has been researching women’s popular culture and fashion in Ghana, West Africa, since 1990. She brings this research into her classrooms, particularly in her third-year courses, African Art and Visual Culture and African Dress and Fashion.