Assistant Professor Adam Ford and students working out of his Wildlife Restoration Ecology lab are forging new collaborations in their pursuit to discover how humans and wolves can coexist in British Columbia. 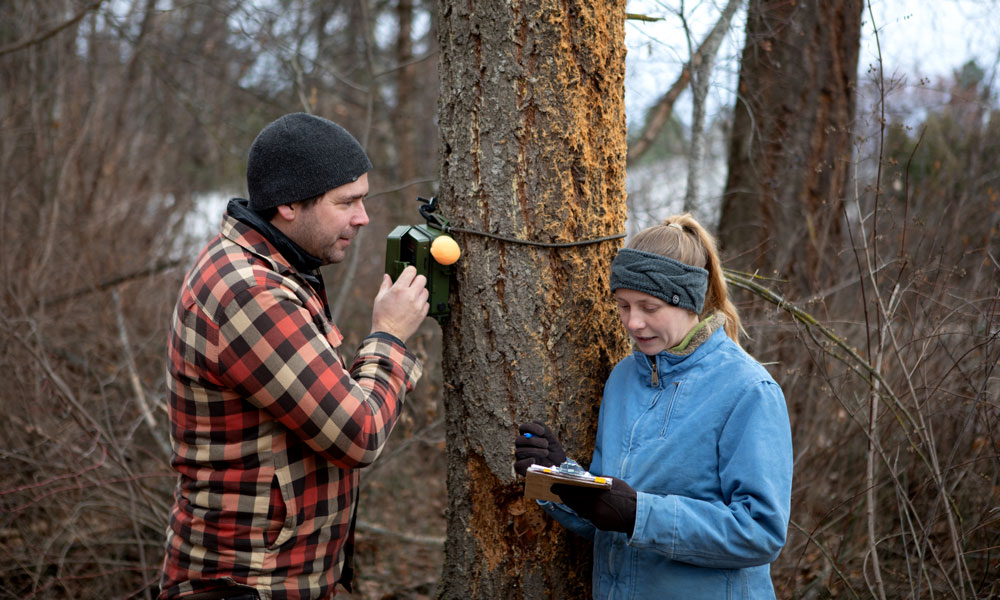 FOR EONS, WOLVES REIGNED AS ONE OF THE TOP PREDATORS in the food chain of the North American forests and plains. Over the last century, these fierce and stealthy creatures have been killed as part of a systematic bounty system of poisoning and shooting by many groups, including the agency that would eventually evolve to become one of the wolves’ most important allies, Parks Canada.

But the tide may be turning for the wolf. In recent decades there has been an eruption of human-caused habitat alteration in the working landscapes of western Canada, and this has favoured wolves. Roads, clearcuts and seismic lines not only provide abundant forage for a wolf’s prey — namely, deer, elk, and moose — but also makes it easier for wolves to move through the landscape to find and kill their prey. Through the abandonment of the wolf bounty, changing social values, and the creation of novel landscapes, the return of the wolf has become an increasingly common experience in communities across British Columbia. 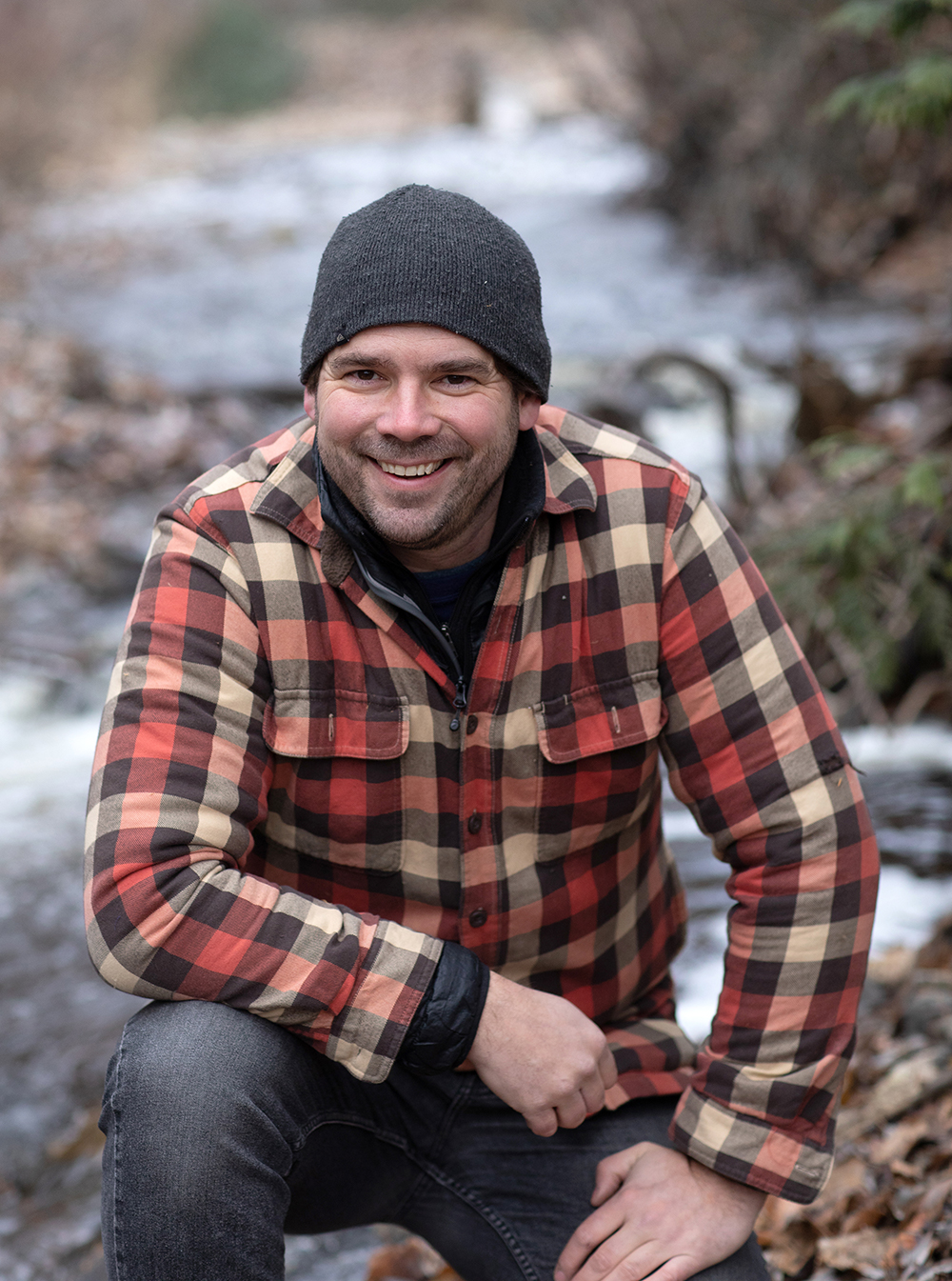 Now, UBC Okanagan students from the Wildlife Restoration Ecology Lab (WiRE Lab), led by Assistant Professor Adam Ford, are helping humans coexist with wolves and better understand the mysterious, intelligent, and social predators who are crucial to the balance of ecosystems.

Two British Columbia wolf populations reported to be in recovery — one in the Kootenays and another on Vancouver Island — are part of two large collaborative research projects, with Ford and his students employing groundbreaking spatial ecology monitoring techniques developed in UBCO’s WiRE Lab.

Ford is a Canada Research Chair in Wildlife Restoration Ecology and the recipient of a 2018 New Frontiers research grant for his work, which endeavours to weave together Indigenous knowledge and western science to support wildlife conservation.

“Ultimately, our contribution is to provide a piece to the human-wildlife coexistence puzzle; how wolves see the landscape and how they see us,” says Ford.

Although there are so many conflicting opinions on how to manage wolves, Ford explains that it’s not difficult to build partnerships around the conservation of wolves.

“This broad and passionate interest in wolves means that when we do come up with answers, there are a lot of people listening. This is where science can have an important impact — but we also need to be on our toes when it comes to communication of these findings,” says Ford, who stresses that the WiRE Lab strives for both theoretical and applied impacts in all of its research projects. 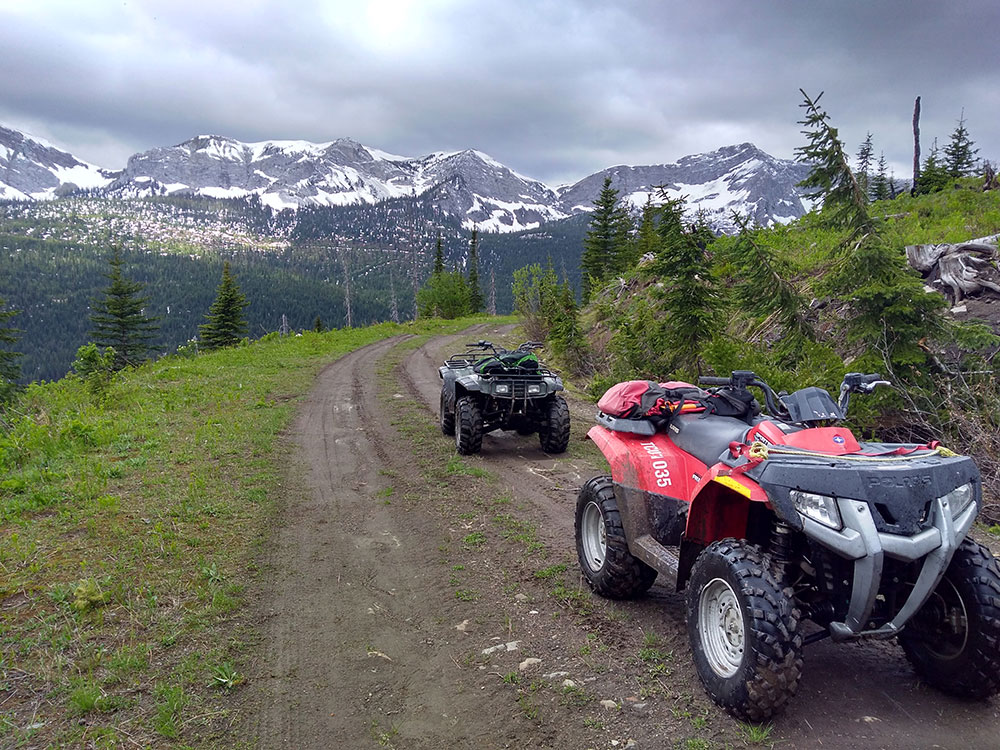 Researchers use ATVs in the Flathead River Valley to service monitoring devices that aren’t accessible by truck.

Wolves are notoriously elusive and, despite their fierce reputation, are usually shy — even timid — pack animals who tend to avoid humans.

A WiRE Lab research project in the East Kootenays region, where it’s thought wolf populations have made a recent comeback, aims to find more accurate methods of counting wolves. 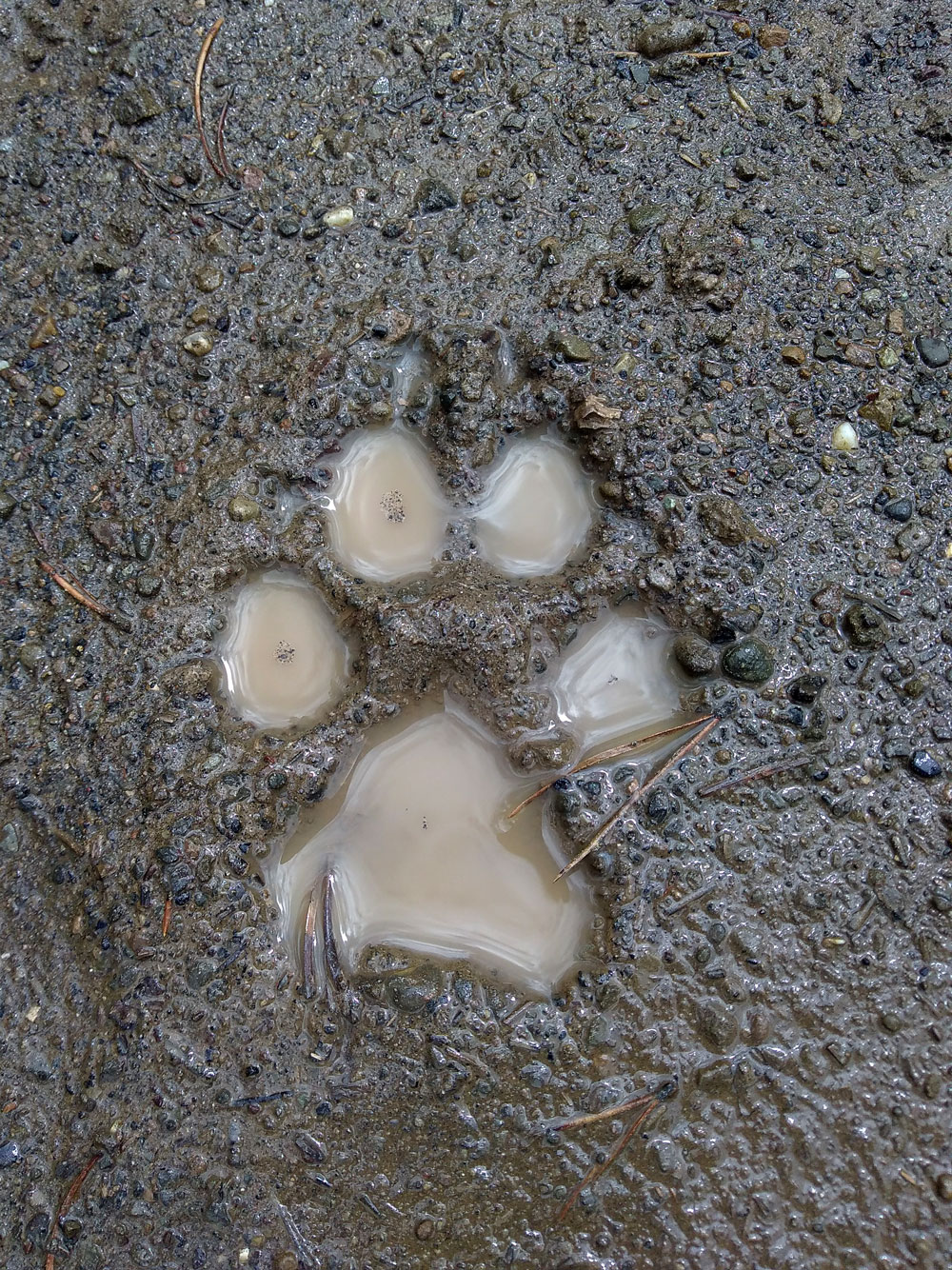 Bordering Montana and Alberta, the East Kootenays is one of the wildest parts of southern Canada. Here, like many places, wolves occur at low densities, thus making the standard wildlife biology ‘tool kit’ used to count animals of limited use. These tools often rely on seeing animals, either from a plane, binoculars or even remote cameras. But new tools are needed and Ford’s team is trying to create them.

One solution may lie in what is heard, not seen.

Howls are being heard and signs of wolves are being seen again, leading locals to believe that more wolves are now in the area. But can a chorus of bone-chilling howls in the night be enough to prove the return — and whereabouts — of the elusive wolf? UBC Okanagan master’s student Danielle Gauthier, who is leading the project, thinks so. Funded in partnership with the Habitat Conservation Trust Foundation, Gauthier’s study of wolves uses bioacoustics — an innovative and relatively new means of monitoring wildlife using high fidelity audio recordings of howls.

Gauthier explains that while sound has long been used to study the rich auditory language of animals like whales, bats, and birds, it’s only recently been employed to study terrestrial mammals.

Currently, wolf numbers in British Columbia are measured through estimates of “prey biomass,” or how many moose, deer and elk are on the landscape. In most cases, the number of prey is highly uncertain, as are the links between the number of prey and wolves. Gauthier needed a better way of counting wolves that overcame the limitations of the status quo.

She adopted a method to measure the distribution of wolves by setting up 26 audio recording devices in a 10-by-10-kilometre grid across the study area. These recording devices were paired with camera traps to provide both audio and visual detection of wolves, which allows the WiRE Lab team to compare newer and more established ways of counting wolves — a key step in the innovation of new methods.

The audio devices turn on each night at dusk and then shut off in the morning, capturing hours upon hours of sound. Compared to camera traps, which are also being used in the study, the potential for audio as a means of research data collection is far greater, says Gauthier.

“Each device can capture wolf howls up to two kilometres away, whereas the cameras only capture the area directly in front of them,” she explains.

“It’s very early in the process but I think it has strong potential in the future,” says Gauthier, who cites several European studies that have explored the triangulation of howls in order to pinpoint a wolf’s location. Gauthier adds that details from an audio spectrogram, which gives a visual representation of sounds, helps her see when individual wolves are chiming in a chorus of howls with their unique voices. 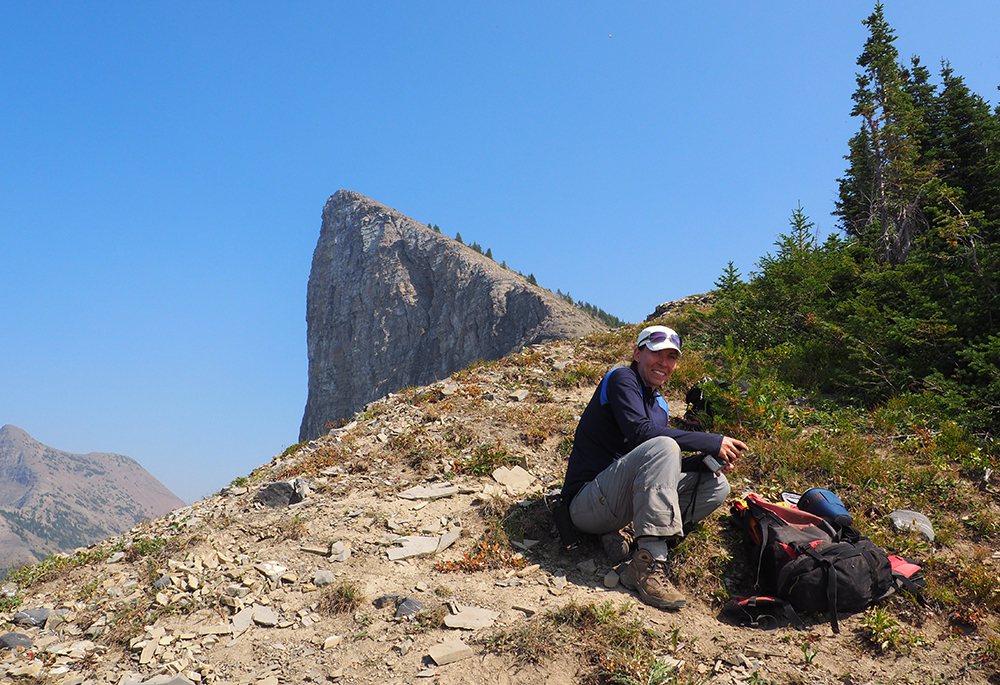 Danielle Gauthier in the Tombstone Mountains.

While the initial results have been promising, Gauthier says a key issue has been processing the data. Hundreds of hours have been recorded so far, and with the sheer volume of data from the audio devices, it’s taken eight people listening for an entire semester to analyze the sound files.

“That’s going to be the major hurdle for this method to gain traction: getting good quality recordings and processing them quickly. But I think with artificial intelligence and machine learning it’s just a matter of time,” says Gauthier, who notes researchers already use computers to study bird songs in this way. “But howls are much more complex and harder to separate out from noise.”

The research is also playing a key role informing various stakeholders in the area; ranchers, government, trappers, hunters and environmentalists alike are all keen to get a better sense of how many wolves exist and where they move on the landscape.

On the west coast of Vancouver Island, in Pacific Rim National Park Reserve, wildlife researchers from the WiRE Lab are studying coastal wolf populations that have made a remarkable comeback after being absent in recent memory.

Part of a five-year project initiated in 2018 by Parks Canada called ‘Wild About Wolves,’ Ford and his students are exploring why human encounters with wolves in the park have risen and how to decrease them. The park encompasses many popular beaches in the Tofino area and has the highest density of visitors in Canada’s national park system.

“Some dogs on leashes have been attacked. The situation has been escalating and Parks Canada has initiated this study to find out what’s going on and how they can best manage it,” says Ford.

The collaboration includes partnerships with the First Nations communities in the region, the University of Saskatchewan, and BC Parks, among others.

Wolves are a particularly significant species to the coastal Nuu-chah-nulth people, who cooperatively manage the park with Parks Canada. Parks Canada is working closely with leaders from several Nuu-chah-nulth communities to learn how the 14 different First Nations in the region have coexisted with wolves for thousands of years.

Following their systematic destruction, the wolf population on Vancouver Island ultimately rebounded in the 1970s and 80s. Coastal wolves have distinctive characteristics — they’re generally smaller than wolves from BC’s interior and feed on marine life as well as deer and even black bears.

Explaining some of the possible outcomes of the study, Ford says, “We hope to find out where interactions between wolves and people are likely to occur, and will work with Parks Canada to come up with management recommendations.”

While wolves will prey on domestic dogs, a wolf attacking a human is extremely rare. According to Living with Wolves, a non-profit US organization, there have only been two wolf attacks causing human death in the past 100 years, compared to 30 human deaths caused by domestic dogs in the US every month.

Still, Parks Canada wants to avoid human encounters with wolves, as it can lead to habituation and food conditioning. Recent wolf-human encounters in the park have seen wolves act uncharacteristically bold and stop in their tracks without hiding, which has been a cause of concern.

Clearly excited by the opportunity to work with Parks Canada on this project, Ford explains this is a rare chance to work with so many different First Nations and stakeholders who all want the same outcome: to find better ways to live with the wolves.

A research team from the University of Saskatchewan, says Ford, will be studying the human side of the interactions in order to better understand how we are reacting to the wolves.

“Our involvement is going to be studying the ecology of the wolves, working out where they are, what they’re eating, how many of them there are, and then tying all of that into why there is an increase in interactions with people,” says Ford, who adds that the park is not a large area and wildlife and people are bound to come into contact.

“Ultimately, our contribution will be to figure out how wolves see humans. If we can see the world through their eyes, maybe we can learn something about how we can better coexist,” says Ford.

Part of the research will involve camera traps that have been set up in a grid around the park, which can provide data to understand where the wolves are moving and when. 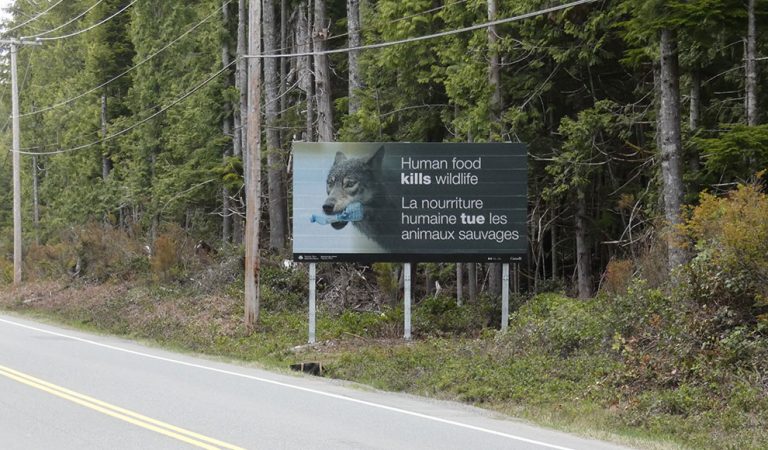 Todd Windle is the Parks Canada ‘Wild About Wolves’ project manager. He stresses that this is “an opportunity to work with Indigenous communities and ensure that Parks Canada’s approach to reducing conflict with wolves reflects the values of First Nations.”

For Ford and his WiRE Lab students, this story about wolves who appear to be making a comeback in both the Kootenay and coastal regions of British Columbia is a tale of fellow inhabitants who are learning to coexist in the ever-changing, delicate ecosystem of today.