Dr. Adam Wei and partners are researching the impact of forest disturbances on hydrology, while highlighting the critical interconnectedness of the Okanagan Valley’s forests and watersheds. 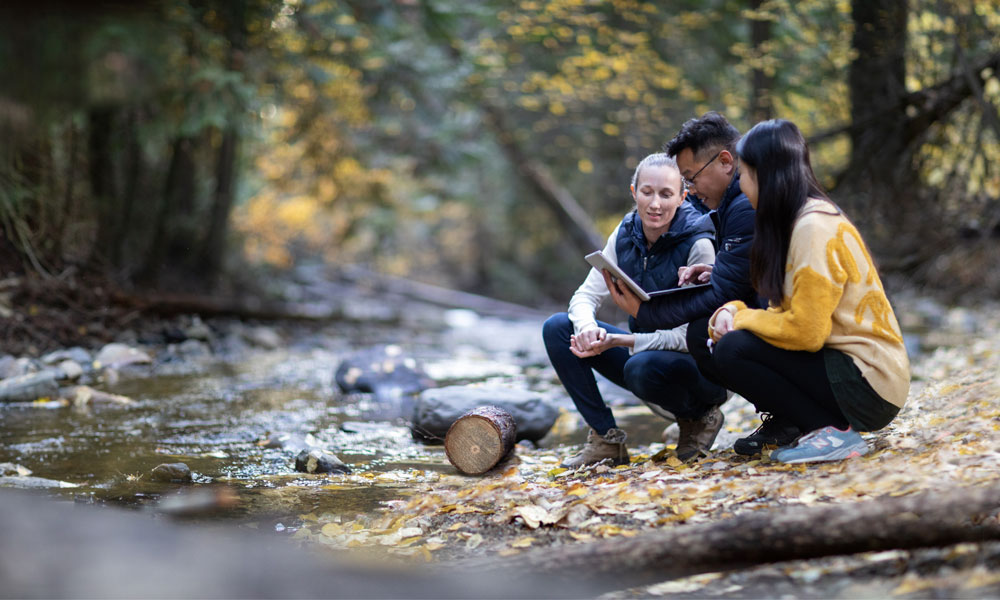 FORESTS ARE CRUCIAL TO HUMAN SURVIVAL. From purifying the air we breathe to providing shelter, life-giving water and habitats for animals, our forests support all life.

Now imagine a landscape ravaged by forest fires, insect infestations and human impacts like timber harvesting. The trees, barren of leaves and foliage, fail to protect the forest floor below from the effects of Mother Nature, ultimately leading to soil erosion and negative impacts on our watersheds.

“Water is critical for everyone — without water, we don’t have life,” explains Dr. Adam Wei, a professor of earth, environmental and geographic sciences in UBC Okanagan’s Irving K. Barber Faculty of Science. “Water availability and management is one of the greatest challenges facing the world this century.”

Dr. Wei adds that forest ecosystems are an important source of water — releasing and purifying it by slowing soil erosion and delaying the release of water into streams. As such, disturbances in the forest not only lead to changes in water quality and supply, but also in the resources dependent on water. And with so many processes reliant on the forest and its water supply, it’s difficult to get a clear picture of the situation.

“Although individual components of an ecosystem can never be fully isolated from the larger context, you can still try to understand all these different components, because that sheds light on the whole ecosystem,” Dr. Wei says. “Pursuing such a holistic approach in my research is extremely important because I see myself as an advocate in protecting our forests.”

Dr. Wei’s passion for forests first bloomed in his hometown of Nanchang, the capital of Jiangxi Province in southeastern China. The Okanagan Valley’s remote alpine terrain, low-lying valleys, fleeting creeks and large lakes mirror the geography of his home, ultimately drawing him to UBCO.

Now this stunning backdrop serves as Dr. Wei’s living laboratory, where he readily ventures into the forests with students to conduct field research. An expert in eco-hydrology, Dr. Wei — who is also Forest Renewal BC’s endowed chair of watershed management — studies sustainable forest watershed management and the interactions between forests, water and aquatic habitats.

“There are important connections throughout this life process, so you have to remember that if you change one element within an ecosystem, other elements down the line will invariably be impacted as well,” he explains.

With a focus on watersheds located in the BC Interior Region — which are affected by a variety of issues including mountain pine beetle infestations, forest fires, timber harvesting and climate change — Dr. Wei wants to know what impact these have down the ecological line. And just as ecosystems have various elements working together, so too must Dr. Wei work with others to unlock the secrets of our watersheds and forests.

In a unique one-year partnership funded through the Interior University Research Coalition, Dr. Wei and his doctoral student, Yiping Hou, partnered with research teams at Thompson Rivers’ University (TRU) and the University of Northern British Columbia (UNBC) to explore the impact of forest disturbances on hydrology. 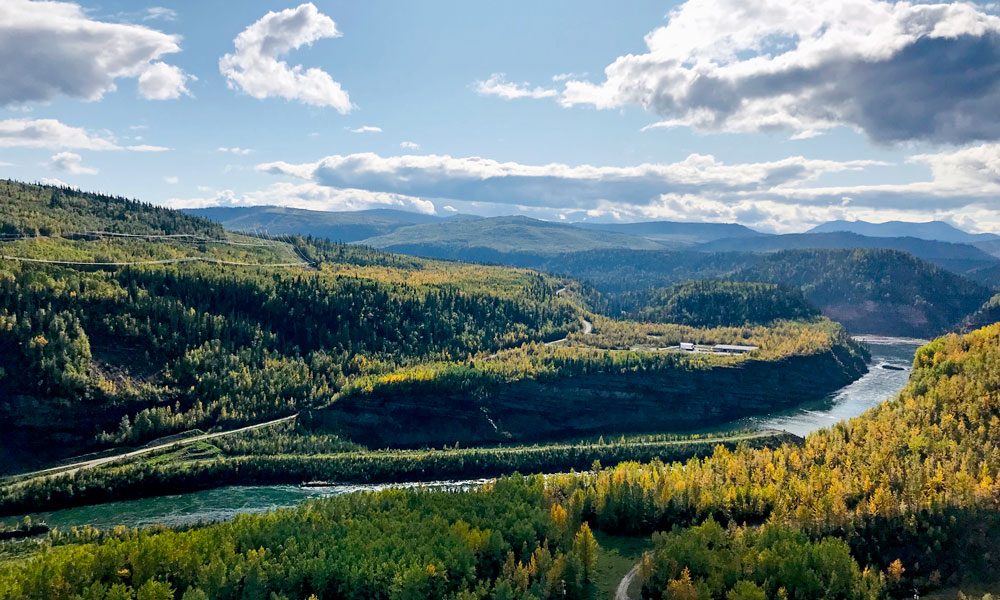 The forested landscape plays a critical role in the quality and quantity of BC’s water supply.

“Many studies have demonstrated that climate, forest disturbances and watershed properties all affect hydrological responses,” explains Hou, who first connected with Dr. Wei through a fortuitous meeting with one of Dr. Wei’s former graduate students in China in 2017.

“For example, the hydrological regime of southern interior watersheds is dominated by snowmelt from March to early summer, while coastal watersheds are dominated by rain, receiving a ton of precipitation throughout the year. Some watersheds have relatively flat topography, while others are in mountainous regions, meaning there are also differences in elevation,” says Hou. “All these account for variations in the hydrological response. But, the level of forest disturbance and tree species in watersheds might also be contributing factors.”

To start unearthing the answer to this complex problem, the research group selected five large watersheds in the BC Interior to examine: three in the Central Interior Region and two in the Northern Interior Region. Dr. Wei and Hou conducted statistical analyses of the watersheds’ climate and flow data from the Water Survey of Canada, along with forest disturbance data from the BC government, to understand the threshold at which changes in the forest lead to significant impacts in hydrological processes. Discovering dissimilar results between the watersheds in the central interior compared to those in BC’s northern interior meant many discussions for the research team.

“These discussions gave us some good ideas of how we could describe our results in a clearer way and tell a better story,” explains Dr. Wei. “There was an incredible synergy between the group that allowed us to achieve great results.”

As for this particular study, Dr. Wei and the team believe the results indicate that forest disturbances are directly changing streamflow. 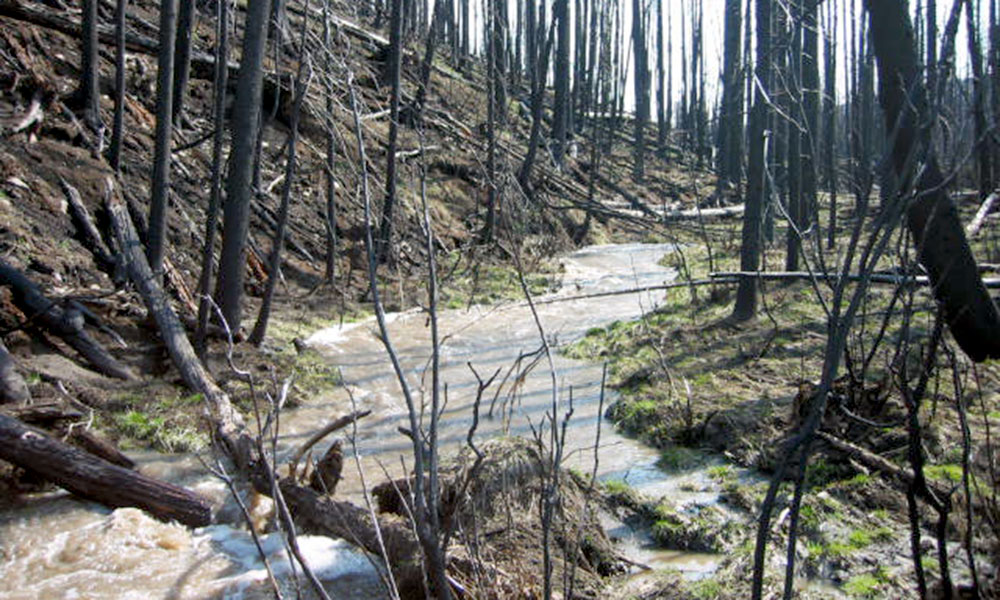 Here, the impact of wildfire on stream flow can be seen.

“Right now, the Central Interior Region is experiencing significant levels of forest disturbance, and we observed increased streamflow in those watersheds,” Dr. Wei says. “That, of course, can lead to flooding and can negatively impact species and animals sensitive to patterns of streamflow. It can also lead to landslides and hazards that affect communities.”

Dr. Wei points to existing research that shows if a large per cent of the trees around a watershed are removed, this will have a significant impact on hydrology. “If there’s a storm, then rain will directly hit the mineral soil and cause erosion. It will also change the water flow paths and amount stored in the soil, which leads to more surface runoff. This can all affect water quantity and quality.”

Current research from the Chilcotin and Chilko watersheds — located west of Kelowna in BC’s Cariboo-Chilcotin region — has found a threshold range of 23 to 30 per cent. Dr. Wei and Hou want to validate these existing threshold numbers for other provincial watersheds with more research. In fact, one of the purposes of Hou’s PhD is to compare suitable forest disturbance thresholds between various regions in BC with different environmental and geographic characteristics. According to Dr. Wei, the thresholds are likely subject to locations with different climate and watershed properties, and hydrological variables of interest.

Dr. Wei adds: “With 40 to 50 watersheds in BC’s Interior Region alone — some of which have severe disturbances already — industry and government need to consider these thresholds in order to protect BC’s valuable water resources.”

The Need for New Perspectives

The importance of coordinating BC’s water resources was recently highlighted in one of Dr. Wei’s studies published in the journal Science. There, Dr. Wei suggests a more systematic approach to forest and water supply research, illustrating the need for a new perspective.

“We were looking at the impacts of deforestation on annual streamflow — and though we were able to conclude that deforestation increased it, the variations between studies were large, with increases between less than one per cent and nearly 600 per cent,” he explains.

“We concluded this was due to water evaporation from the soil and on plants due to forest cover loss. But the amount lost ranged from less than two per cent to 100 per cent. That’s a huge difference that can be attributed to scale, type and severity of the forest disturbance, as well as climate and location of watershed properties. There are so many variables that need to be considered, and not doing so can result in contradictory conclusions.”

“Water is critical for everyone — without water, we don’t have life. Water availability and management is one of the greatest challenges facing the world this century.”

To limit disparities, Dr. Wei says future research and watershed management approaches need to be more systematic and include a broad spectrum of variables related to hydrological services such as water supply, flow timing and water quality. He also suggests using new tools like machine learning and climatic eco-hydrological modelling.

“By having a systematic approach to all forest-water research, this will reduce the likelihood of a misleading assessment, which in turn will give us a better chance to solve some of the problems affecting our watersheds,” says Dr. Wei.

And as the Okanagan Valley continues to remain one of the fastest-growing regions in British Columbia, more people mean more activity and greater water demand. “There are significant issues facing our watersheds that require solutions from many groups and levels of government.

“It’s critical we realize the impact of forest disturbances on our watersheds and work together to ensure that our water resources are sustained in the long term. I think that’s the only way to protect all these connections in our ecosystem.”