Soil scientists at UBC Okanagan are digging into the challenge of making plants more resilient to environmental change. 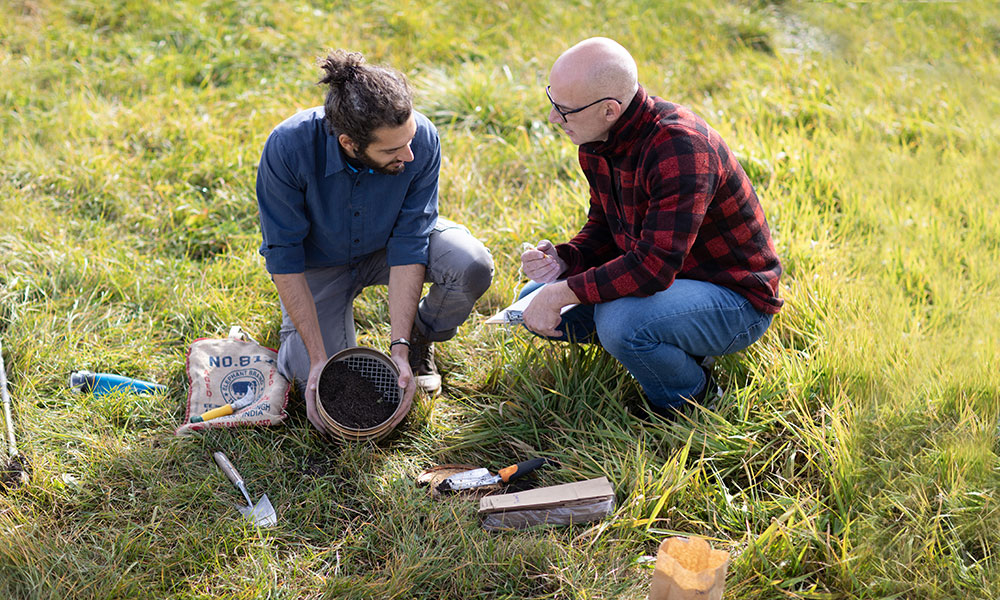 THE DIRT BENEATH OUR FEET IS OFTEN TAKEN FOR GRANTED, YET IT’S STILL A PRECIOUS RESOURCE. Approximately one-third of the earth’s soils are already degraded from over-tilling, pollution and over-planting — and with more than 7.5 billion people relying on terra firma for food, soil degradation has become a critical issue.

So how can we reverse this trend and replenish our land?

“In order to repair or manage anything, first you need to know how it works,” says John Klironomos, a biologist in the Irving K. Barber Faculty of Science (FoS). “In the plant-soil ecosystem there are key ingredients, but like any recipe, the secret of success is about proportions and procedure.”

Klironomos explains that it can be challenging to maintain and sustain a plant or crop over time, since the effects of tilling, adding fertilizer and when and which micro-organisms to add are unclear — especially with our changing environment.

“Many of our agricultural farms and forests are sensitive to climate change,” he says. “A small change in the amount and frequency of rain could mean the difference between a high or low crop yield.”

Klironomos is studying how to make plants more resilient to changes in the environment, and believes that fungi in the soil may play a central role. We’re all familiar with the fungi that grow on bread as moulds or those that we consume as mushrooms; however, the fungi that Klironomos and his team are examining form “mycorrhizas” — partnerships with plant roots.

“More than 80 per cent of agricultural plants associate with mycorrhizal fungi,” says Klironomos. “The fungi and the plants depend on each other for survival. This makes them an interesting focus and target for research.”

He adds that the relationship between mycorrhizal fungi and plants is symbiotic: the fungus help plants absorb nutrients, and in turn, plants provide food to the fungi as carbohydrates or sugars. 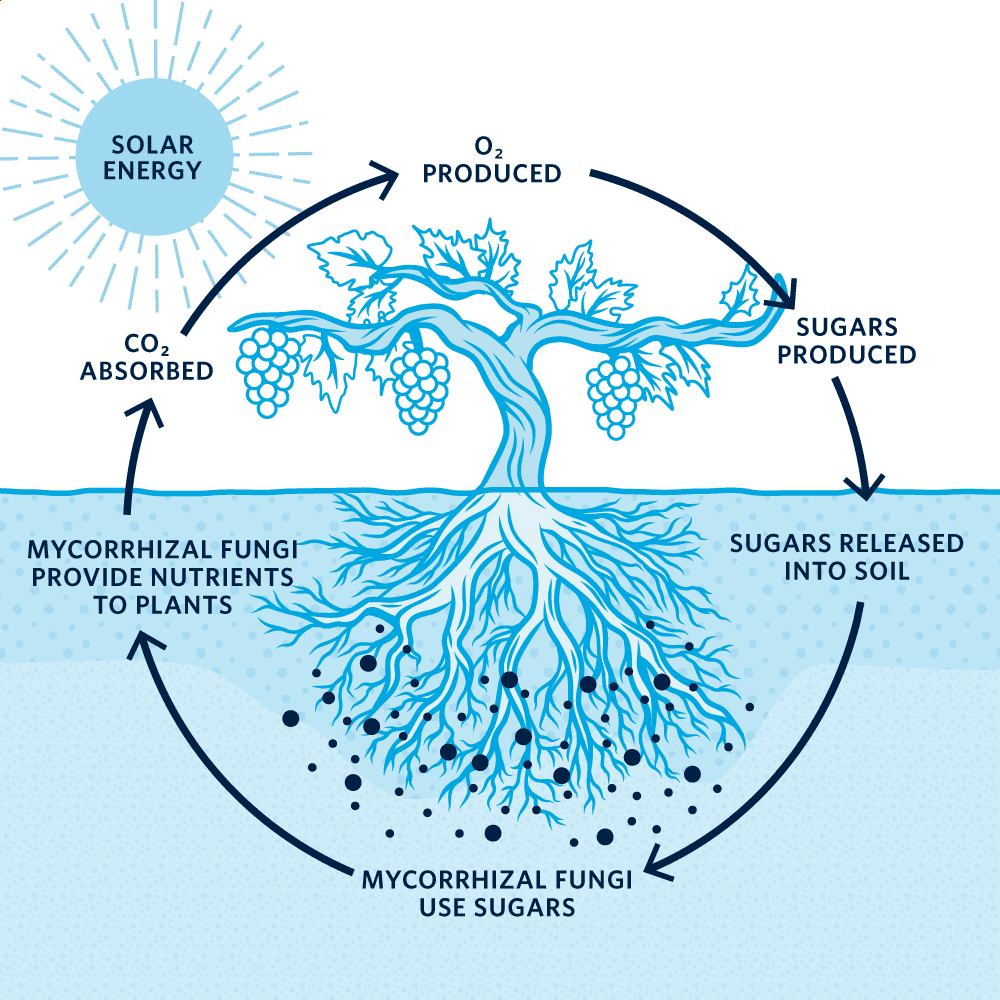 “Plants take carbon dioxide from the air and, through a process called photosynthesis, turn it into sugar for the plants,” he says. “This is how carbon dioxide levels in the air are reduced by plants. But, it’s a tightly managed system and can easily go off track.”

Klironomos is examining how fungi keep plants resistant to change, even when factors like temperature or water are altered. It’s already known that some fungi are more adaptable than others to these changes, but determining which fungi provide the best protection is one of the research team’s key questions.

“Anything we can do to help stabilize our plant systems will benefit us all,” Klironomos says. “We need our plants to be productive.”

Fellow researcher Miranda Hart is a soil saviour. She studies the variability of the fungi that co-exist with plants. Her studies have shown that this biodiversity is a critical indicator of soil health. 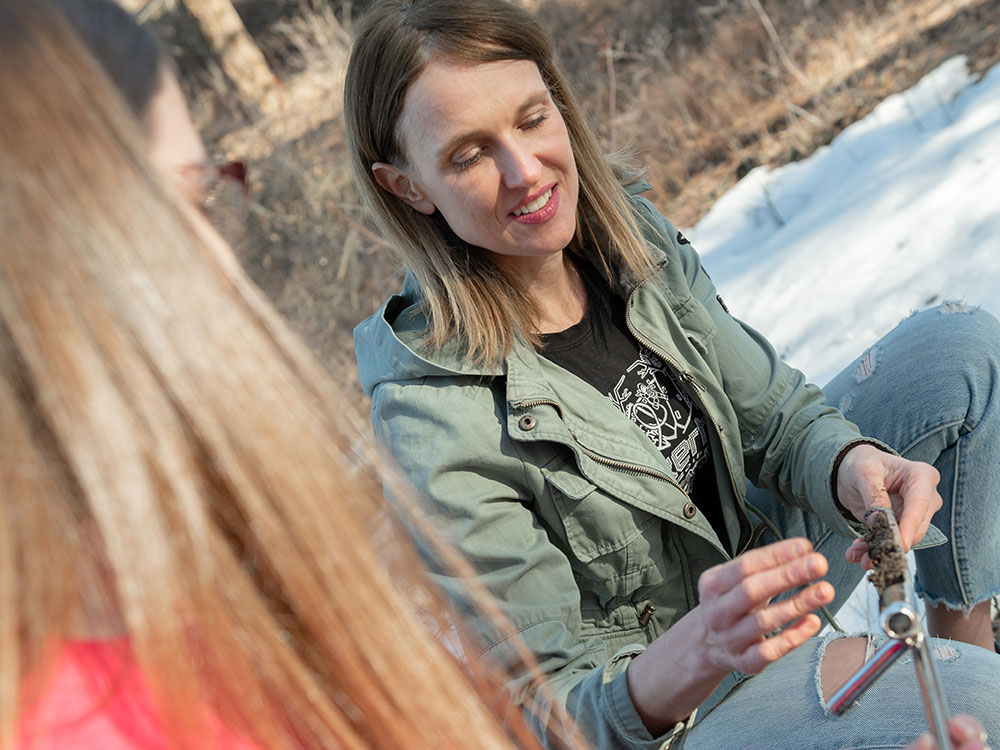 “Whole ecosystems are based on the biodiversity in our soil,” says Hart, a professor in FoS. “If we reduce soil biodiversity, we can lose entire ecosystems.” She references historical examples — where crop failures have resulted from lack of proper soil maintenance.

“Our earth is not a renewable resource. We need to protect its integrity.”

Hart and her team are working to better understand how soil biodiversity can be changed, either by altering plants or by adding microbes to the soil. The addition of microbes to soil is increasingly common in agriculture and a practice that Hart finds “terrifying.”

“We don’t know what microbes were initially in the soil and we have no idea if the addition of new ones will be beneficial or invasive. Right now, we’re playing catch-up to understand the implications of this practice.”

For centuries, First Nations peoples recognized the importance of crop selection on soil health and would rotate the ‘three sisters’ of corn, edible beans and squash crops.

Today’s farmers use a similar practice, alternating non-cash crops with those that are profitable. Known as cover cropping, this strategy protects against soil erosion, recycles nutrients and suppresses weeds. Although some of the science behind this is known, the relationship between cover crop and disease mitigation has yet to be uncovered.

Two graduate students from the Hart and Klironomos laboratories are defining the impact of cover cropping on soil-fungal populations, particularly in vineyards. 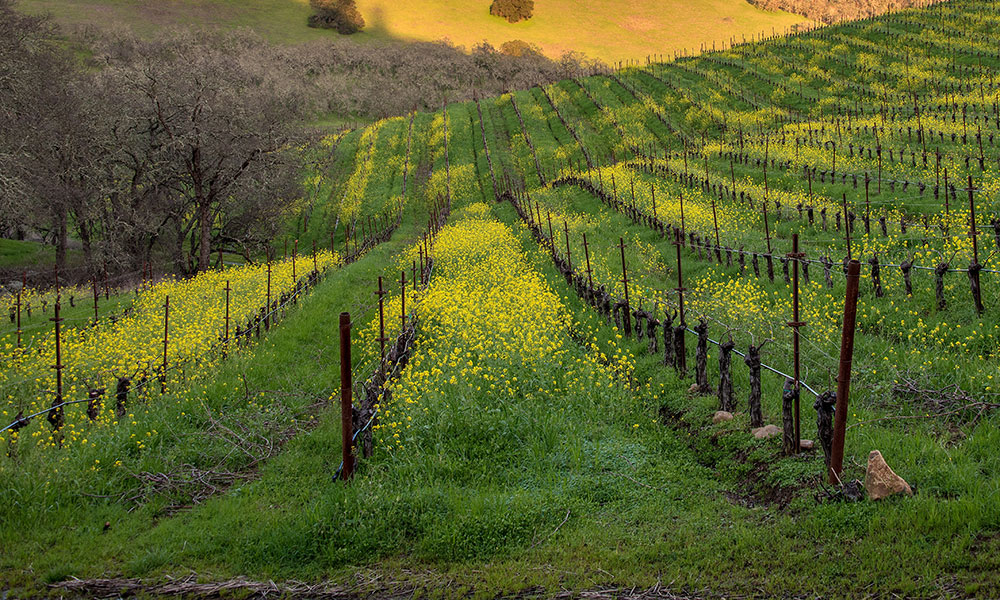 An example of a vineyard cover crop

Black-foot disease is caused by a variety of harmful fungi that targets grapevine trunks or roots, especially in young vineyards such as those in the Okanagan Valley.

“There’s been increasing public demand for sustainable wine production methods which means we have to look at alternative approaches to fight this disease,” says Andrew Richards, a master’s student with Hart. “With the relative ease of planting between vine rows and on footpaths, a cover crop could be the right solution.”

Over the last two years, Richards has examined the effect of planting different cover crops to stave off black-foot disease progression, specifically at the level of the vine’s root. He demonstrated that the grapevines fared better when grown in association with cover crops, especially when grown with plants from the cabbage family.

“Our findings suggest that cover crop plants can offer protective elements to the disease-prone grapes.”

“As plants are added to a system, each provides different components to the soil,” he says. “Our findings suggest that cover crop plants can offer protective elements to the disease-prone grapes.”

Upon further examination of the soil, Richards found it was richer in microbes when grapes were grown with the cover crop plants than without. He explains that more microbes in the soil means healthier plants. “Typically, when you have just one plant it’s easier for a pathogen to take over.”

The cabbage family may be a useful cover crop, but fellow graduate student Antreas Pogiatzis wants to know more about how this works. “Cabbage family members are unique because they don’t rely on mycorrhizal fungi to survive,” he says. “In fact, they secrete chemicals which have anti-fungal properties.”

Although this may make cabbage an excellent candidate to help fight black-foot disease, researchers are now asking: is the cure worse than the disease? Can cabbage plants also kill fungi that help keep the grapevines healthy?

Pogiatzis’ early findings show that the cabbage plant extracts have a negative growth effect on the mycorrhizal fungi, but it’s not certain that this is bad news for the grapes.

Pogiatzis continues to evaluate the anti-fungal nature of cabbage family members and their potential impact on grape-growing. “Our studies might be useful for organic farming, but as of yet, we’re just putting the puzzle together,” he says. “There are many factors at play.”

One of these factors is time. “Cover crops take a long time to condition the soil, so growers shouldn’t expect to change their soil in one season. Multiple seasons are needed to build up proper soil functions,” adds Richards.

Although humans have been farming for more than 20,000 years, we’ve just scratched the surface in our understanding of soil’s complexity. Identifying the soil components required to sustain our crops and forests has recently become a global priority — so much so that the United Nations named December 5 World Soil Day. It has also rallied thousands of soil scientists, including those at UBCO, to generate and communicate soil knowledge.

Hart was one of those scientists, recently contributing to a United Nations report updating the organization on the current status of soil biodiversity in North America.

“This is one of many first steps to green the planet,” she says. “I believe we can do this one field at a time.”