From interpreting oral histories, to supporting disconnected communities and revitalizing endangered languages, UBC Okanagan researchers are giving a voice to Indigenous communities. They are advocates, passionate and driven to engage society in a conversation about their history.

MEETING JEANNETTE ARMSTRONG for the first time is a bit daunting. She is a Canada Research Chair (CRC) in Indigenous Knowledge and Philosophy, an award-winning writer, and an activist, novelist and poet.

She is an advocate and campaigner for Aboriginal rights who seeks to change deeply biased misconceptions related to Aboriginal people. But within minutes of talking with her, it is easy to forget Jeannette’s many credentials and become captivated by the stories of her people. 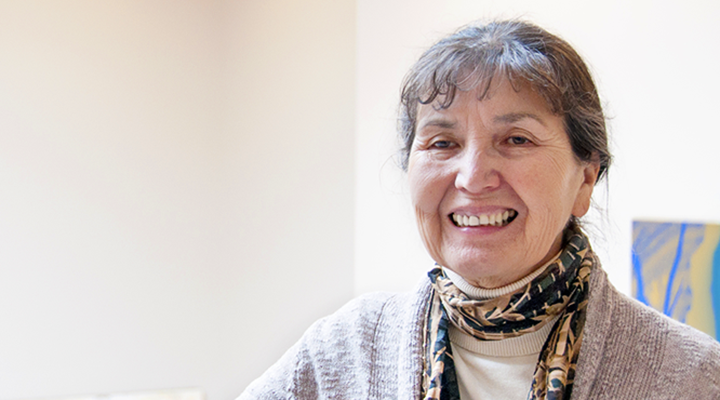 Armstrong is a knowledge keeper, fluent in both English and the nsyilxcen language. Her ability to tell the stories of her people is an obligation and honour that has been passed down through generations.

For many Aboriginal peoples, their stories are more than narratives; they are historical oral documentations that have numerous applications from governance to environmental practices. They also reinforce the interdependency of humanity with the environment.

“We are the stories,” says Armstrong who adds that the stories connect every aspect to daily life, “there is no disconnect.”

“Coyote was once on his travels and come at the close of day to the house of a giant, whose name was Swanaitem. He determined to spend the night here. He went in and found the giant lying on his back. He did not speak or take notice of Coyote… Presently Swanaitem got up and took two round boulders that lay at his right side and knocked them together. Immediately they began to burn like fire. He now told his people to prepare supper for their uncle, meaning Coyote…”

—Story excerpt (told by Jeannette Armstrong for her doctoral thesis, Constructing Indigeneity: Syilx Okanagan Oraliture and tmixʷcentrism) by Charles Hill-Tout, “Report on the Ethnology of the Okanak’en of British Columbia, an Interior Division of the Salish Stock.” The Journal of the Royal Anthropological Institute of Great Britain and Ireland. Vol. 41. 191.

Thanks to the CRC support, Armstrong and her students have been surveying, analyzing and categorizing Okanagan Syilx oral language. Until now, there has been little research in this area, perhaps due to a Western cultural blindness to Indigenous methods of knowledge documentation in storytelling.

The number of nsyilxcen-speaking individuals in the community is falling (currently less than 1,500), so Armstrong’s ability to translate, interpret and archive has become imminently important. She and her team have made much progress.

Her research will help bridge traditional knowledge with contemporary Syilx and non-Indigenous societies, contributing to ecological and sustainability practices and linking story knowledge to areas such as governance, land use and health. Armstrong notes that the Okanagan Nation Alliance, among others, is interested in what knowledge these texts can bring forward.

“At UBC’s Okanagan campus, I know that my research directly contributes to the Syilx Okanagan community, as well as other Indigenous communities, in terms of tangible applications for the betterment of cultural revitalization and positive change,” she says.

What’s in an image?

Icons are not a thing of the past. Today, they have significance in capturing global understanding—think the logos of Twitter or Apple, to name a few. Similarly, images such of ravens, coyotes and salmon have had consistent meanings for the Okanagan peoples for generations:

“In our stories, each character is very well understood in terms of what information they carry with them and how they are used to deliver the knowledge,” says Armstrong.

She notes that the animal spirit characters are not human analogues, nor are they animals, allegories, or personifications.  They are an interconnected concept and all have distinct personalities and ways of interacting both with each other and with humankind.

A Story to Tell

Armstrong is also known for her literary work. She has written about creativity, education, ecology and Indigenous rights. Slash, which Armstrong published in 1985, is considered by many as the first novel by a First Nations woman.

Slash explores the history of the North American Indian protest movement through the critical perspective of the central character, Tommy Kelasket, who is eventually renamed Slash. In the novel, Tommy encounters intolerance and racism in an assimilationist school system but, through encouragement from his family, finds meaning and pride in his Okanagan heritage

Armstrong wanted Slash to connect with and relate to students. The work has since been incorporated into the Grade 11 curriculum as a study in contemporary history.

“Slash positions the reader to walk in the moccasins of an Indigenous Okanagan person, encouraging an Indigenous view of that period rather than the one-sided view available in popular media,” says Armstrong.

Armstrong is passionate about her academic role as an Indigenous studies professor where she researches, develops, educates and informs the minds of the next generation. She suggests that UBC Okanagan is well-positioned to engage students with its dedicated Indigenous Studies Program, which provides a broad perspective on decolonization and Indigenization of current systems.

“I get excited when students are inspired and new insights occur.”

“Students can choose to bring knowledge back to their Aboriginal communities. Or, those not from our community can learn about our practices and apply them accordingly.

“I get excited when students are inspired and new insights occur.”

In the process of helping grassroots movements find their voice, David Lacho also found his own. 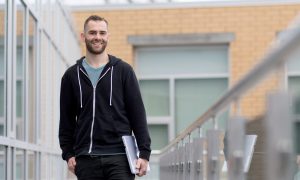 As a linguistic anthropologist immersed in research, Lacho has worked to reclaim Indigenous placenames of the land, investigate the unique francophone Madelinot culture, translate a sapient humanoid language from French into English, and plunge into modern technology.

Fresh off of earning a Bachelor of Arts in 2015, Lacho went on a working holiday to teach English to junior- and high-school students in Marseille, France, where he also taught himself how to code.

Upon his return to the Okanagan, he began collaborating with community members of the Splatsin First Nation, the southernmost band of the Secwepemc Nation. Their language, Secwepemctsín, is endangered. Less than one per cent of over 800 band members speak Secwepemctsín and many who do are approaching 90 years old. So Lacho brought his diverse UBC education and knack for language revitalization and technology to the community.

Today Lacho works with the Splatsin Tsm7aksaltn (Splatsin Teaching Centre), where he collaboratively developed an augmented reality app with the community and its elders for language and learning revitalization. The idea evolved from their collaboration and iterative process. “That’s the whole point of it,” he says. “Being directed by community members.”

Jokingly self-described as a kind of “language IT guy,” Lacho is also the recent recipient of UBC Okanagan’s 2018 Master Student Researcher of the Year.

“You’re always connected to your research in some way. You embody it. It becomes a part of you. And it becomes something you can’t just leave behind, especially when you’re doing research in the social sciences.”

Among other awards, he was one of only 10 Canadian Master’s scholars in 2016 to receive the Canada Graduate Scholarships to Honour Nelson Mandela, awarded by the Social Sciences and Humanities Research Council. And, in 2017, Lacho went to do more fieldwork-this time in Papua New Guinea with funds from UBC’s Sharron Simpson Family Community Impact Award, the Irving K. Barber School of Arts and Sciences International Education Travel Subsidy, and funds from the National Science Foundation.

From his many travels, Lacho has learned a few things.

“There’s something I didn’t understand before I began,” he says. “You’re always connected to your research in some way. You embody it. It becomes a part of you. And it becomes something you can’t just leave behind, especially when you’re doing research in the social sciences.” 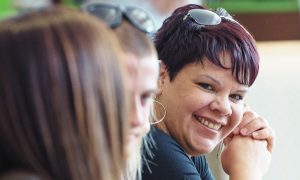 Song found motivation to heal and help others after speaking at the Truth and Reconciliation Conference (TRC) in 2013.

“I am a survivor among many. This is exactly why I am committed to working with children in education, to help empower them and to help these children find their purpose regardless of their upbringing.”

Song graduated in 2016 at UBC Okanagan with a BA degree and a continued thirst to learn more about Indigenous survivors of the Residential School System. That turned into her current master’s degree research, which includes intergenerational survivors, the state of bonds within family structures, and the kinds of structures that help people in the community connect to each other and to the land.

“I am a survivor among many.”

Noting how poor communication skills have transcended generations within the Carrier (Dakelh) Nation, Song hopes her graduate pursuits—including aspirations for a PhD—will help to build and reconnect these communities.