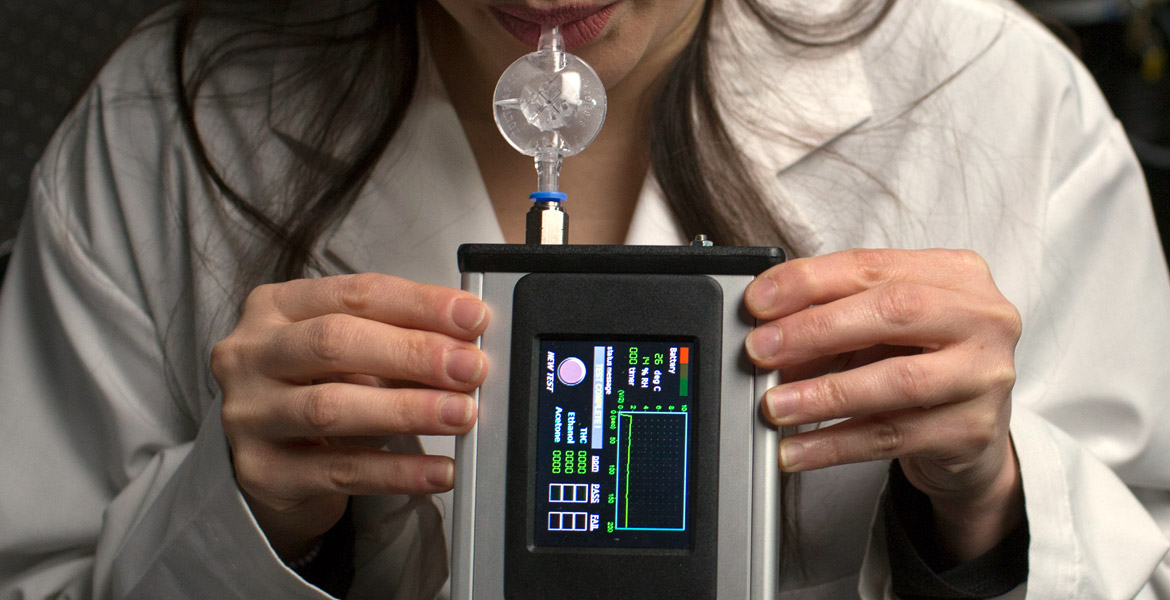 THE LEGALIZATION OF CANNABIS has long been discussed and debated—and now, more than ever, is close to realization.

Millions of Canadians are affected by cannabis use on a daily basis—affected by impaired drivers and users in the workforce, by the shadowy elements of organized crime, and an over-taxed police force whose priority will be youth protection if the Cannabis Act receives Royal Assent.

As the country braces for the unknown possibilities of this green revolution, a team of mechanical engineers at UBC Okanagan is launching the use of an effective and sustainable breath-analyzer that detects the primary psychoactive component in cannabis: THC.

But that’s not all it does. The device created by Prof. Mina Hoorfar and the research team at the Advanced Thermo-Fluidic Laboratory detects a multitude of biomarkers, substances in an organism that indicate such things as disease, infection or environmental exposure.

Power at Your Fingertips: Evaluating a person’s health or the level of chemicals in their system

“When we set out to evaluate our research, we were looking at a variety of applications,” says Hoorfar.

“It quickly became evident, as marijuana was being legalized across North America, creating an inexpensive, accurate, portable and easy-to-use handheld THC breath-analyzer would be well-received.”

The differentiating characteristic with this innovation is its small size, low cost and high accuracy.

Hoorfar’s team developed and built a highly-sensitive semiconductor gas sensor that evaluates a person’s health or the level of particular chemicals in their system through biomarkers.

The analyzer component includes a gas sensor integrated with a 3-D-printed microfluidics channel which lowers the production cost of the unit. Microfluidics is the science of controlling and manipulating fluids in a geometrically constrained sub-millimetre scale.

Large analysis units have long been able to undertake these sorts of diagnostics but the differentiating characteristic with this innovation is its small size, low cost and high accuracy.

The team started using their sensors for analyzing alcohol in wine and the leakage of natural gas in pipelines.

The response to Hoorfar’s breath-analyzer was immediate. Upon initial release of their findings, police and biomedical companies began reaching out to Hoorfar seeking partnerships to bring the device to market.

A number of companies, including those partnering with Hoorfar, are now racing to release their devices in anticipation of demand, should the proposed Cannabis Act be adopted by parliament.

What’s in a breath? A lot more than halitosis

The science of breathing isn’t always straightforward. A human breath can be associated with apnea, asthma, allergies, halitosis and a host of other conditions. But when engineering researchers like Hoorfar think about breath, they think about how to extract its compounds.

The average pair of human lungs holds five litres of air but only breathes out about 0.5 litres of air per exhale. Within that breath, there are 874 volatile organic compounds and thousands of inorganic compounds.  Hoorfar’s team extracts and analyzes those compounds through microfluidics and compares them with biomarkers.

Proposed legislation for the testing of drug-impaired driving involves oral fluid drug screening. However, it takes longer than screening for alcohol and can’t convert a sample of oral fluid to a blood drug concentration. Police can demand a blood sample to test for drugs, in addition to the oral fluid evaluation.

New diagnostic techniques such as Hoorfar’s breath-analyzer will not just provide faster results but also reduce patient discomfort. If you require escalated medical attention, a simple breath could replace needles and other invasive tests or procedures.

Medical marvel: How a gas sensor integrated with a 3-D-printed component can evaluate person’s health or the level of chemicals in their system

“The success we’ve had with the breath-analyzer has accompanied other similar innovations,” Hoorfar says, “like rapid detection of cancer through small blood samples and detecting antibiotic-resistancy in breath samples.”

The breath-analyzer collects the molecules through a straw-like device then sends them through the micro-fluidic channels that are designed to detect certain chemicals or biomarkers.

The complexity of the analysis depends on the number of elements being tested and the sensitivity level required.

“We aren’t far from a day when wearable devices and technologies like the breath-analyzer will provide vital and instantaneous health information to patients at a push of a button or with a breath sample,” she says.

The new legislation creates three new offences for having specific levels of a drug in the blood within two hours of driving. For THC, the proposed levels will be: