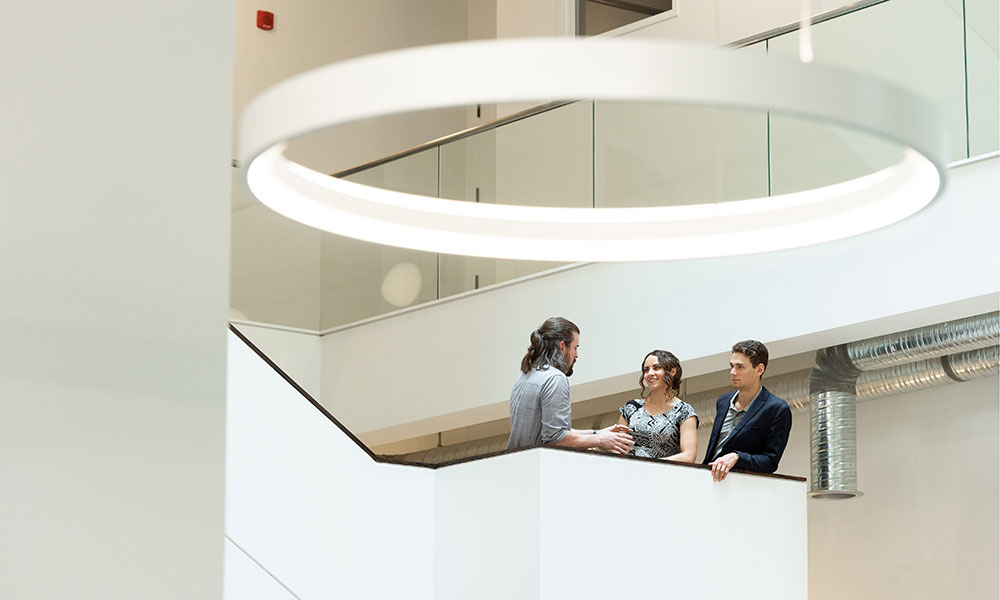 THE PATH LEADING TO A DREAM JOB IS RARELY A STRAIGHT LINE. In fact, labour market trends suggest the ‘typical’ career path is a little like a mountainside switchback with turns, twists and plateaus before reaching the peak.

A recent online survey by Workopolis found Canadians are changing jobs often — 51 per cent of those polled said they had been in the same job for less than two years, while only 30 per cent held one job for more than four years.

Today’s workers are more willing to “job hop” in order to land that elusive dream career.

Still, some things haven’t changed including a lingering catch-22: the need for work experience before securing that all important first job.

That’s where co-op programs come in. Since 2016, the interdisciplinary UBC Okanagan Co-op Program has been providing co-op terms for students in most disciplines — arts, fine arts, human kinetics, management, social science, and science — and co-op terms have been available for many years in the School of Engineering. Students across the Okanagan campus have an opportunity to weave real-world work experiences into the final years of their degree.

To receive a Co-op distinction upon graduation, students in the interdisciplinary UBC Okanagan Co-op Program must complete a minimum of three work terms, or a total of 12-months of experience.

Bachelor of Science student Melany Sanchez jumped at the opportunity.

“I wanted to work in environmental justice but I didn’t really know how to get there or what that would look like,” explains Sanchez, who has always been passionate about environmental issues, specifically water quality.

As an international student from Colombia, Sanchez felt nervous about navigating Canada’s labour market. She says Co-op provided her with the connections and the confidence she needed to succeed.

It also gave her a sense of clarity on how to find her dream job.

“Before I went on my first Co-op term, one of my mentors said: ‘Melany, no matter what, remember that sometimes learning what you don’t like is even more valuable experience.’”

Sanchez recalls finding that advice “a little strange.” But it soon made sense when she realized her work at a water quality lab during her first two Co-op terms wasn’t exactly what she wanted to pursue.

“Even though it wasn’t what I loved, it taught me interpersonal skills and I found that helpful.”

“I was still glad to have the experience because it offered me that stepping stone,” says Sanchez, whose third Co-op position — monitoring and assessing water quality with the environmental protection division of the BC Ministry of the Environment and Climate Change Strategy — aligned with her environmental justice ambitions. 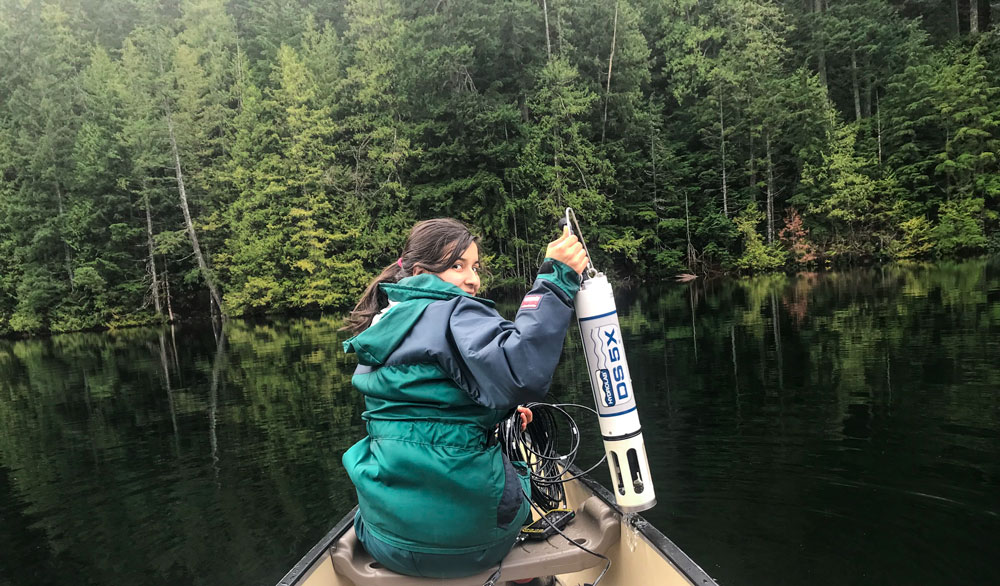 Sanchez’s voice raises an octave with excitement as she explains the work she clearly loved doing for the ministry.

“I worked on a project to update the water quality objectives for the Burrard Inlet [in Vancouver]. I assessed all the different permits and authorizations in that watershed and noted the risks to water quality. Every two weeks I’d go on a day trip to conduct field sampling in the creeks or streams,” she recounts.

“I’ve learned so much about environmental management in BC and all the different opportunities there are for my degree,” says Sanchez.

“I absolutely love it.”

Sanchez finished a fourth Co-op term with the Ministry of the Environment and Climate Change Strategy and recently completed her bachelor’s degree in environmental chemistry. She’s now been hired by the ministry to continue with the water quality project. She says Co-op helped her to see new opportunities as she works towards her dream of preserving Earth’s most precious resource— its water.

The Work of Finding Work

While the Co-op program works tirelessly to help students succeed, the term ‘placement’ is a misnomer.

Even though the Co-op office works with a growing number of partners to generate postings, students are responsible for their job search and compete for positions like they would for any real-world job.

“We coach them through the whole process of pre-employment training and then work with them during their Co-op experiences. In many cases we’re working with the same students for two and a half years, so we really get to know them,” says Clark.

“We try to incorporate our partners into our workshops as well. Students actually sit down with a community partner and do mock interviews.”

There is no guarantee students will secure a Co-op position, but Clark says most students are successful in their job search and get hired. Many students excel in their roles and are often invited back for multiple Co-op terms or future employment by the same employer.

“If you told me then I’d be doing the work I am now, I’d have laughed at you,” says Traplin, who is currently completing his final Co-op term.

“I had been ingrained in the workforce for years. It was hard to extract myself because the bills don’t stop. But I took a great leap of faith and took some evening courses to begin with — and that inspired me to go full time.”

Traplin excelled in a two-year diploma in Indigenous studies at Camosun College.

When an Elder-in-residence urged him on — saying, “don’t stop now”— Traplin took the advice to heart and transferred into the third year of UBC Okanagan’s Bachelor of Arts in Indigenous studies.

As a mature student, Traplin knows the challenges of finding gainful employment.

“It was imperative that I take on and find professional experience during my degree before I was thrust back out into the professional work world,” says Traplin, who immediately applied to the Co-op program.

“I thought, this will give me the practical experience to apply the knowledge I’ve been acquiring over the last three years. And it really tested my mettle,” says Traplin. 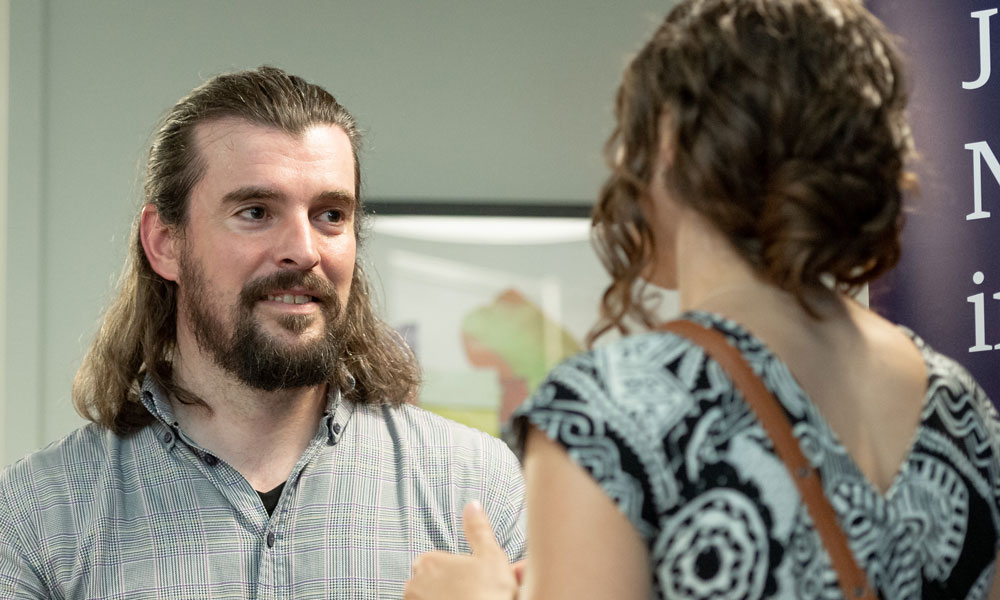 While Co-op extends a student’s degree by a year, Traplin says the trade-off is worth it. “Taking a year off studies to actively search for employment in the field is daunting, but not so daunting as if I were to graduate with an undergraduate degree and be out in the real world with no support.”

Traplin’s first Co-op position was with the BC First Nations Health Authority (FNHA).  The work he performed was not your typical intern filing and office administration. Instead, he was sent out into communities to work directly with First Nations on projects with Indigenous youth.

Traplin was so successful that his supervisor, Jade Schneider, says her coworkers at FNHA were fighting over him.

“Once Jackson had been with us for a week or so, I had to explain to my coworkers that we are glad you love him but we need to let him do these projects. He was so popular with the staff, they all wanted him to work with them. We would have turned around and hired him in a heartbeat.”

“The Co-op office was amazing. They made sure we were fully aware of the process and what the whole process was going to look like. This not only helped Jackson but helped us give him a really good experience,” says Schneider.

Jackson not only rose to the task, but in Schneider’s words, “went over and beyond.”

“He functioned at such a high level. The dedication that he had for the position was just incredible.”

Traplin’s final Co-op term is with a UBCO led project called Indigenous Educational Pathways. He is currently weighing his options: a job offer from the group or pursing a master’s degree.

Traplin recommends the Co-op program for students who want to get the most from their education.

“Co-op will build you up and help you be that confident and professional individual that is required by these organizations.”

The first-ever cohort of interdisciplinary Co-op students joined together in May 2019 to celebrate their achievements.