Each year, UBC’s Okanagan campus welcomes more than 1,200 first-year students—many making the campus their new home away from home. Using a well-established playbook, varsity athletes and volunteers make a big assist on Move In Day.

THE LAST WEEKEND OF AUGUST is one of the most spirited times of year at UBC Okanagan. The courtyard fountain is gurgling, the grounds are groomed, and the residence doors are wide open for new arrivals.

About 1,200 first-year students will land on campus to make contact with their peers, and get introduced to their new lodgings and campus community.

Moving into residence for the first time can be daunting, but UBC Okanagan has it covered. A bevy of dedicated campus volunteers help with this transition—moving boxes, directing traffic, answering questions and handing out tissues for teary-eyed parents. 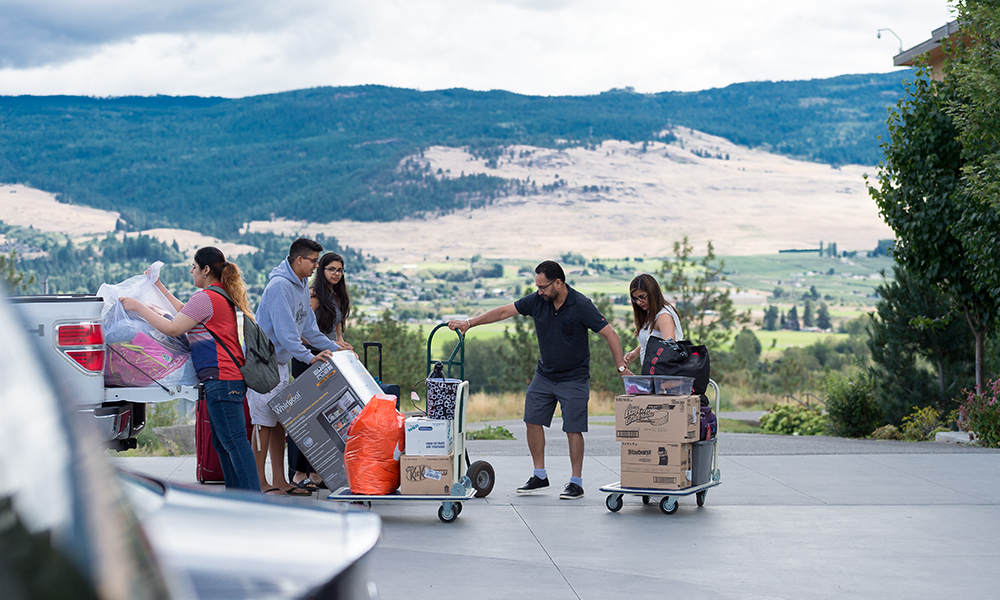 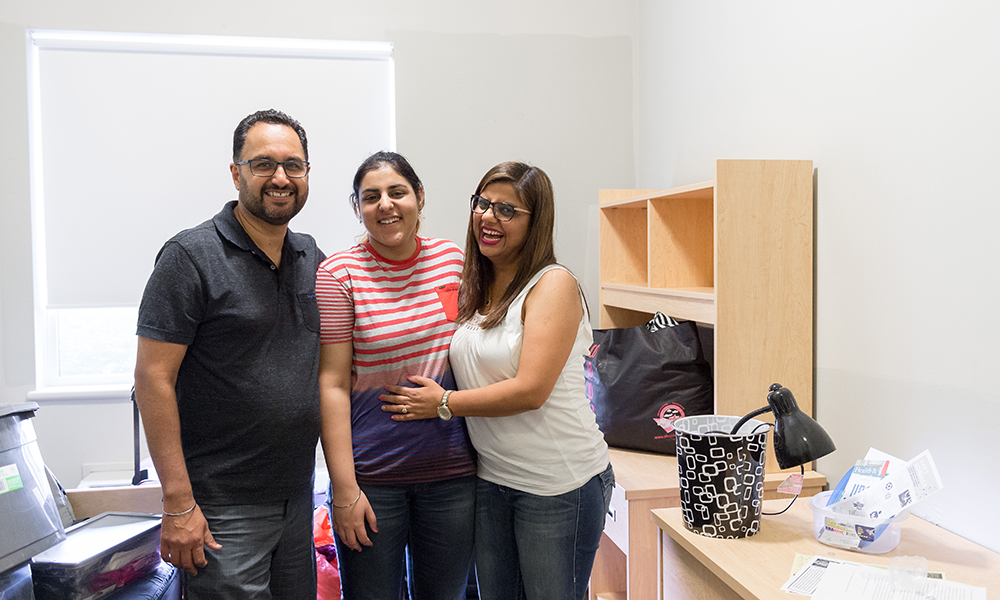 Harleen (middle)—moved in and moving up.

RESIDENCES AT A GLANCE

“This is a well-oiled machine.”

In a conveyer belt-like process, parents and other willing participants pull up to a designated drop zone, where new students are met and escorted to their rooms. Numerous helping hands make haste of the process, and the driver is soon reunited with their student passenger before separate, simultaneous parent and student orientation meetings later in the day.

“This is a well-oiled machine,” says Shannon Dunn, UBC Okanagan Director of Business Operation. “Our student athletes and the many campus volunteers, including staff and students, bring incredible enthusiasm and energy to the day.” 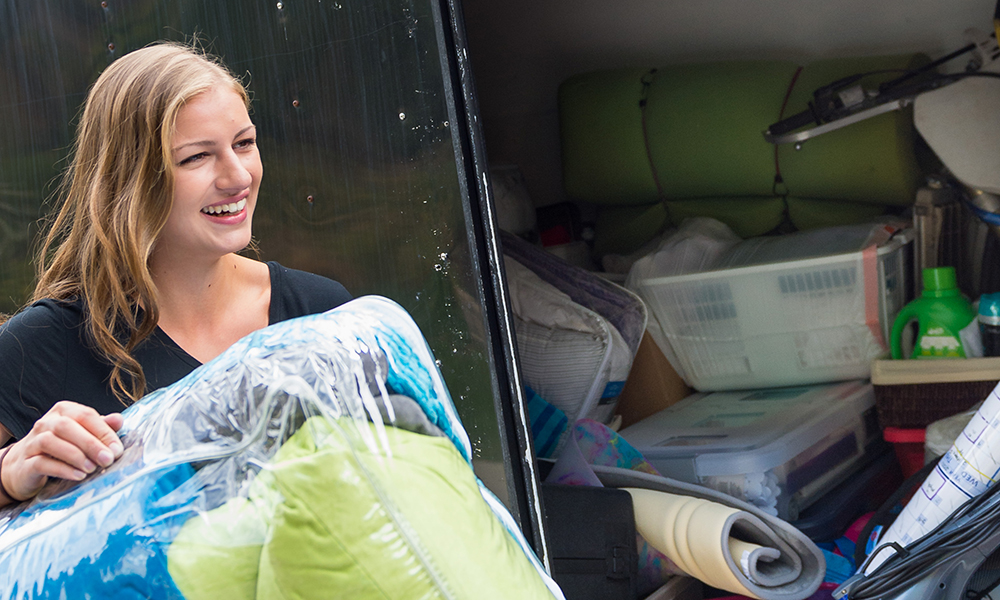 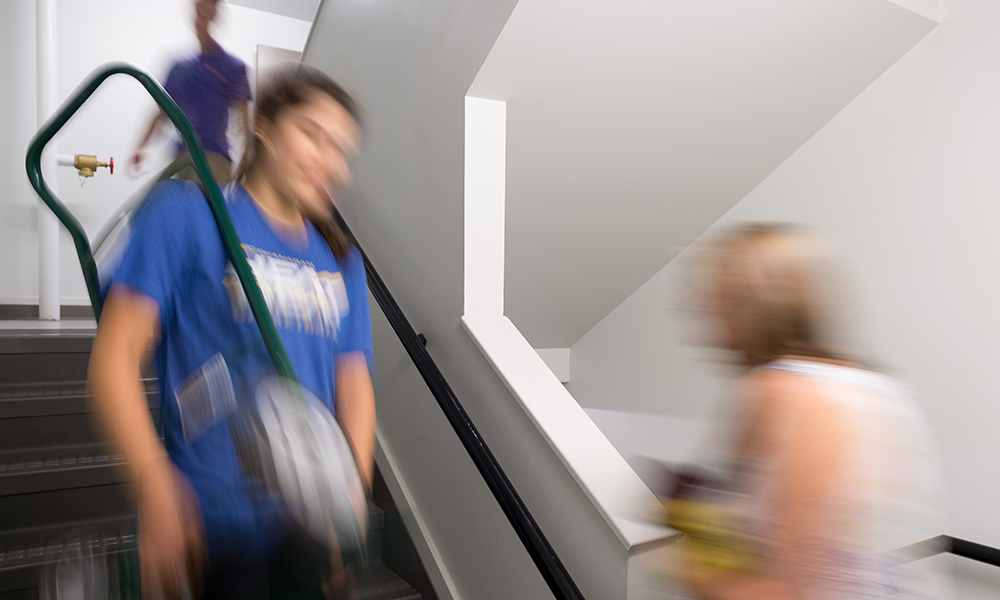 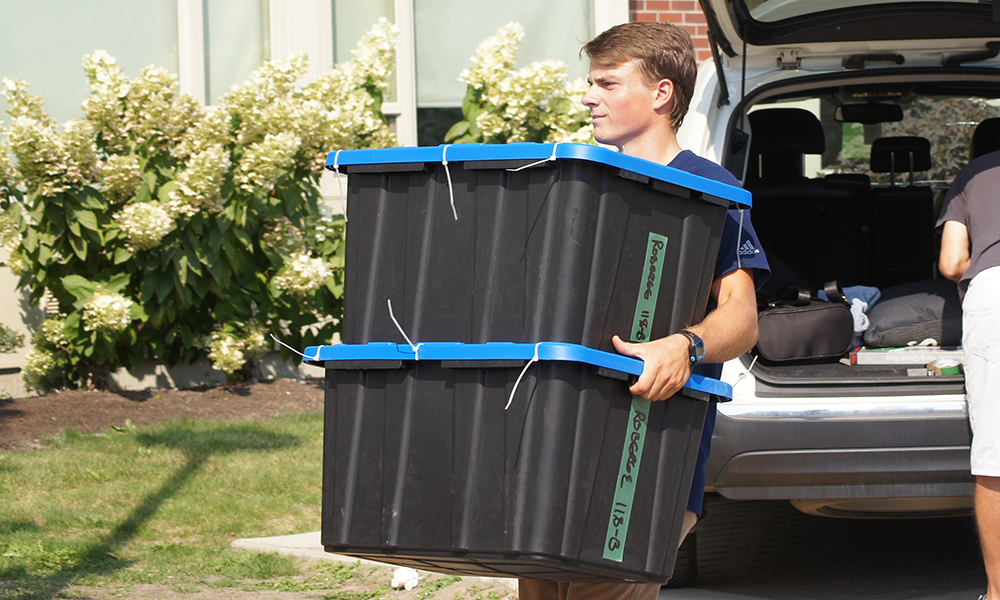 20% from Canada outside of BC

Support from the Heat athletes is a long-standing and mutually beneficial tradition. The athletes connect with and welcome the new students who, in turn, benefit from their athleticism and school pride.

According to Dunn, not only are new students thankful for the support, so are the parents, who are invited to attend their own information conference.

“We feel a strong connection to our parents,” she says. “They have expressed their appreciation of how welcoming the campus is.” 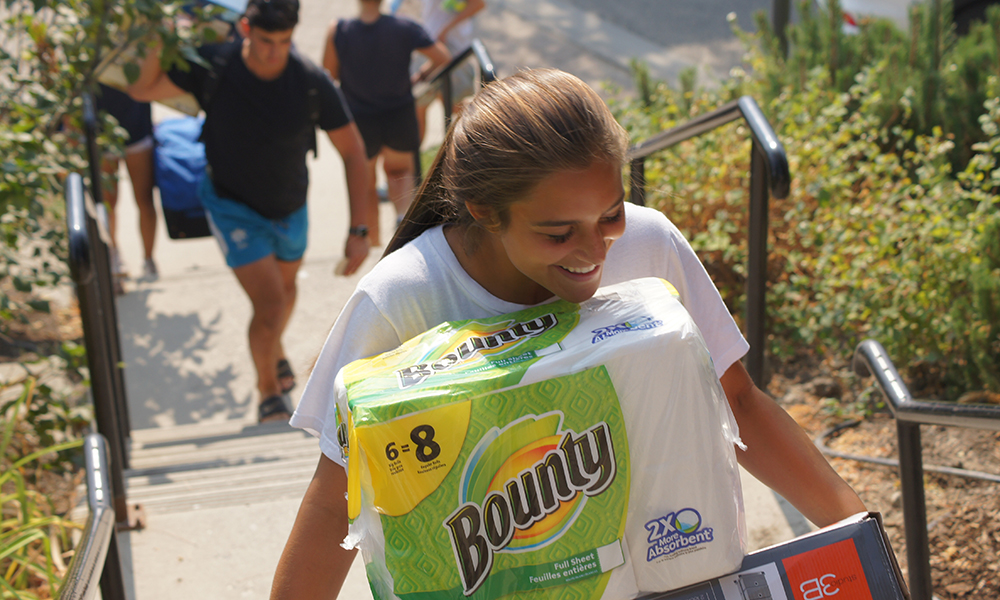 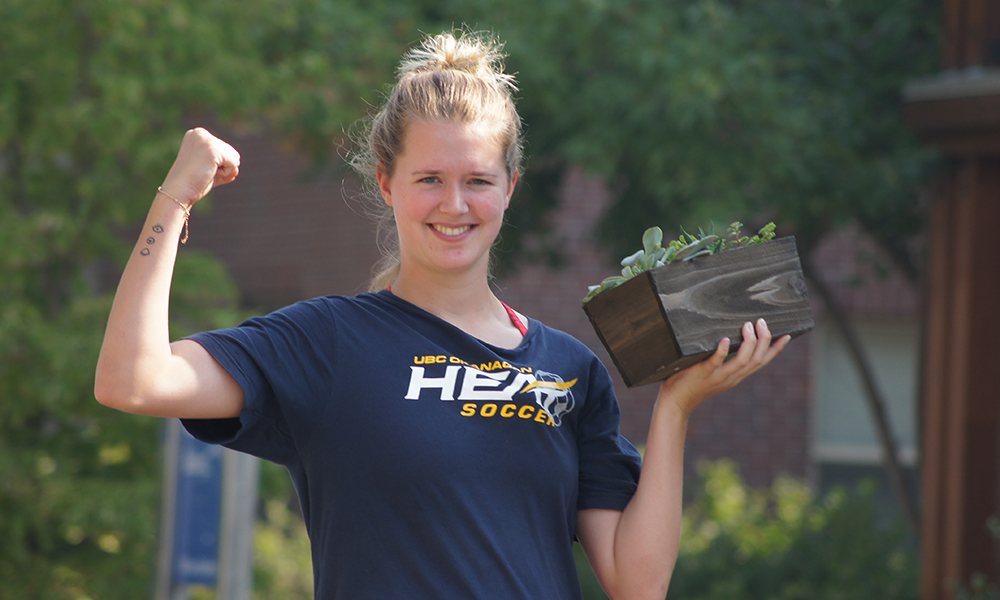 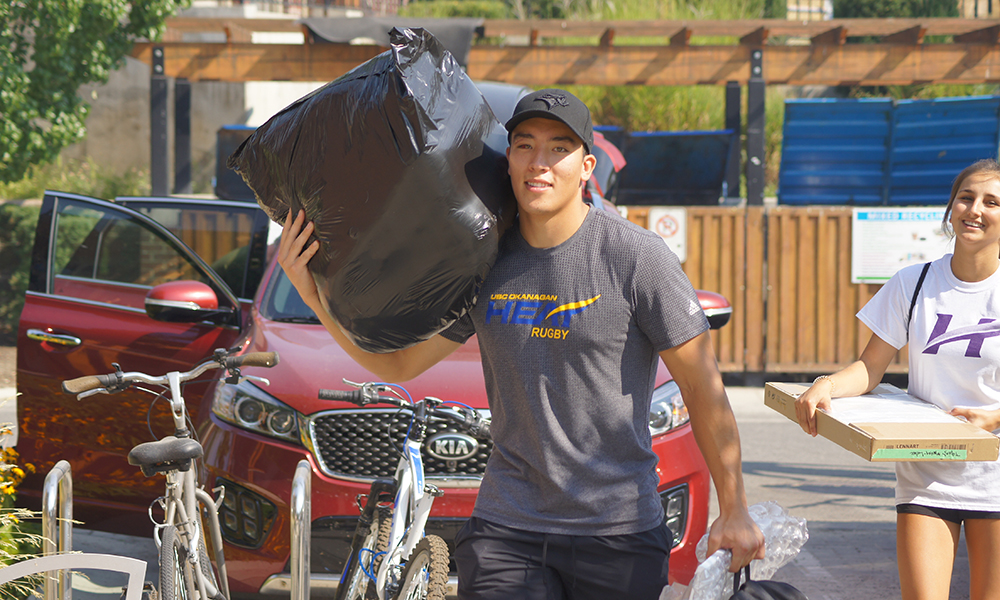 From computers to chairs to Costco-sized toilet paper bundles, the Heat athletes have helped to move just about everything. Some of the biggest challenges are carrying items without handles and lifting big-ticket items.

She adds that seeing the diversity of what students bring is interesting: “Some students have a truckload of possessions and others just bring the necessities.”

“The appreciation from the new residents and their families is all the coaching we need.”

Heat volleyball all-star Natalie Livingston is also a Move In Day veteran volunteer and enjoys the spirit of the day.

“It’s fun to work with my teammates off the court. The appreciation from the new residents and their families is all the coaching we need.”

Both athletes forged new friendships during the day and look forward to participating again. 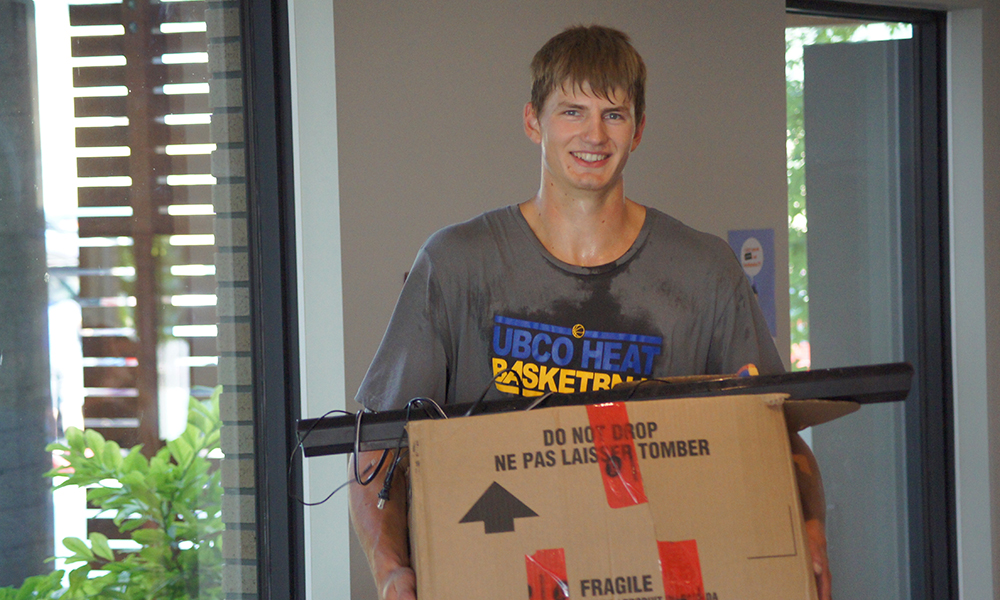 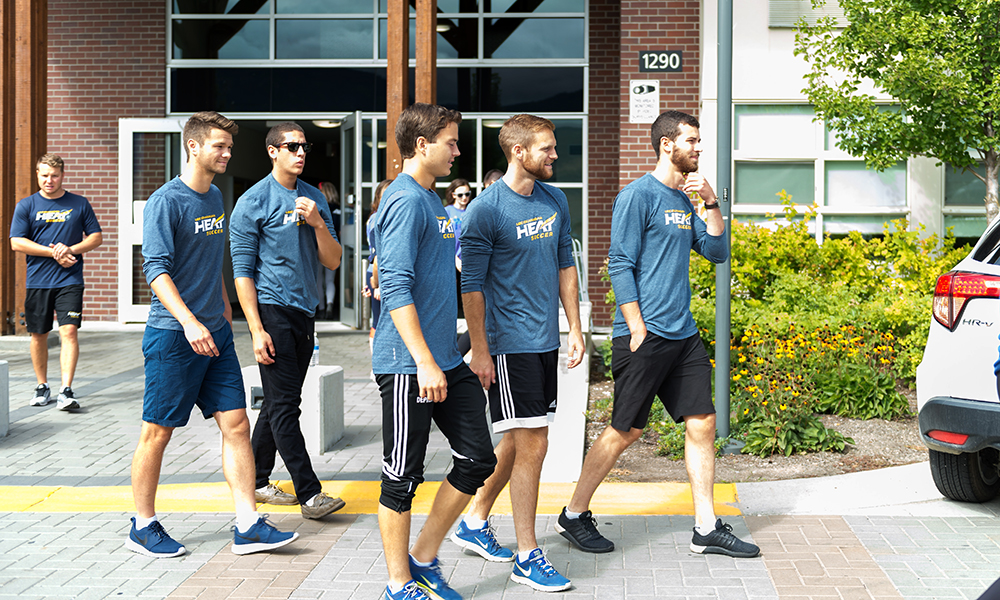 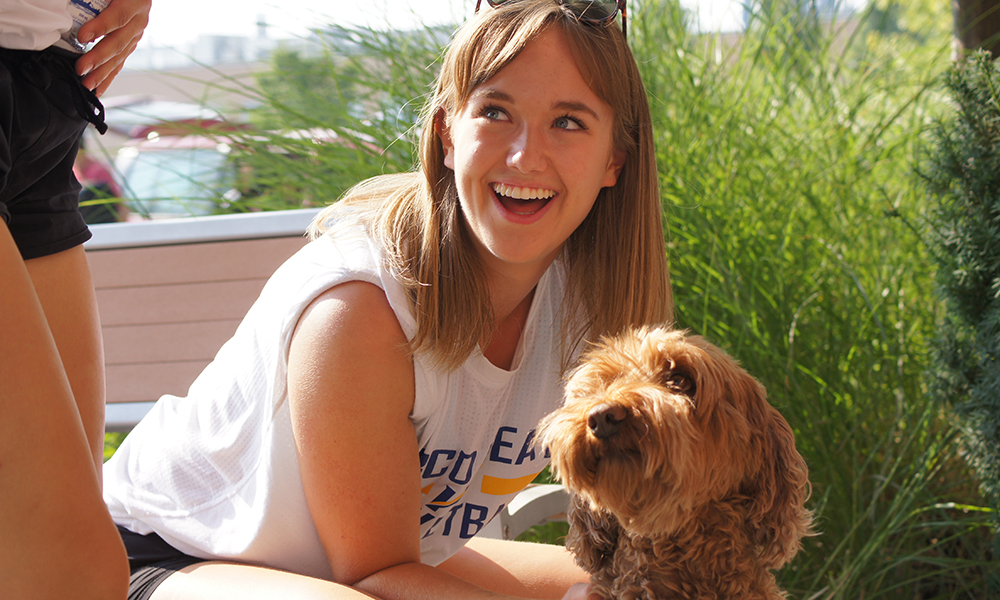 In 2013, Zoë McNair was 17 years old and ready to move away from home to start a new chapter as a UBC Okanagan student. She was looking forward to attending a world-class university that was close to her hometown of Vernon.

“I didn’t want to live too far from my family, but I was ready to be on my own,” says McNair, cheerfully. The compromise was to move 40 km south and take up residence in Kelowna on UBC’s Okanagan campus, a bustling environment close to the Kelowna International Airport.

McNair admits that she was nervous when she first arrived on campus for Move In Day. That was the day she met fellow undergrad Lyndon Duncan, a second-year student who was a residence advisor (RA)—and several years later, her beau. McNair was taken by his generosity and devotion to incoming students.

“I didn’t want to live too far from my family, but I was ready to be on my own.” 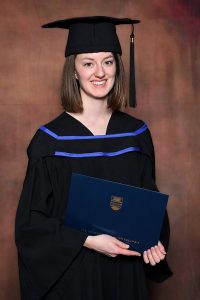 UBC alumna Zoe McNair graduated in 2017 with a BA in International Relations.

Lyndon Duncan is a UBC Okanagan alumnus (BA, Political Science), originally from White Rock BC, who came to campus with a crew of hometown friends. He admits that he relied heavily on those familiar faces during his first year and this impacted his ability to meet other students.

In second year, however, Duncan branched out by becoming an RA, which helped transform him from “shy and sheepish to confident and outspoken.” (Read Lyndon’s Story.)

In that role, not only did he meet McNair, but he discovered he had a knack for supporting the student community.

“My life decisions have pivoted around this early commitment to become a RA,” says Duncan, who is now a Residence Life Manager at UBC’s Vancouver campus.

The enthusiasm of RAs like Duncan motivated McNair to also apply for the mentorship program. “Becoming a RA helped me get out of my shell,” she says. “Because I was in a leadership position, I was forced to meet people.”

McNair suggests that new students should try to explore different experiences: “You never really know what your niche will be.”

The path for both alumni is largely uncharted, but their common experience at UBC provides some firm steps—steps that began with friendly faces, athletic energy and a well-established playbook. 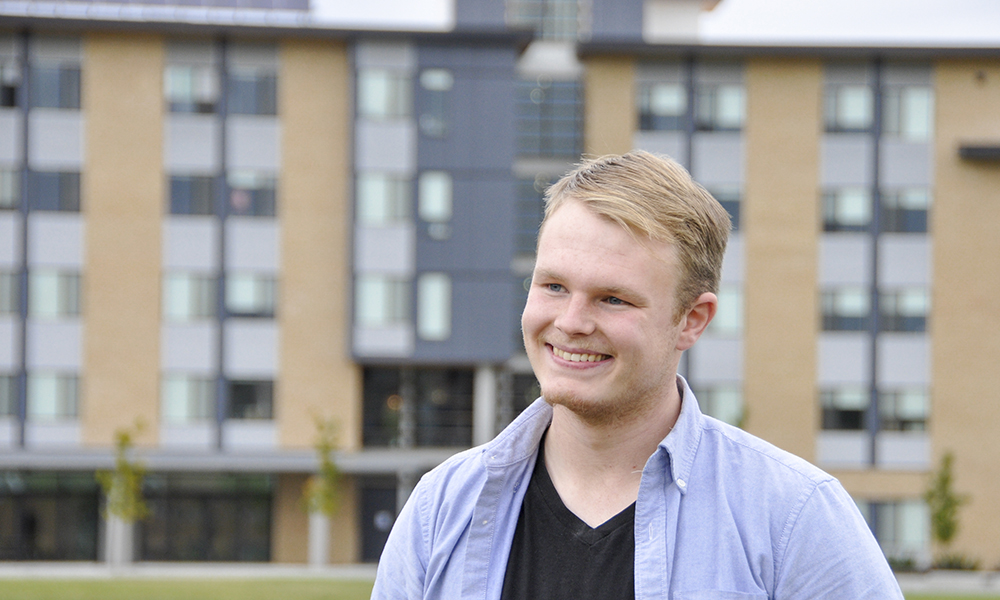