THE TEAM: Two institutions, four research teams, including three from UBC Okanagan, two industry partners, and three funding agencies. These collaborators gathered and analyzed information on the impact of pilot fatigue on performance in the air.

The mission generated important new findings, with participation from UBCO professors and students in the fields of statistics, engineering, and health and exercise sciences, as well as UBC’s Survive and Thrive Applied Research (STAR) partnership development team. 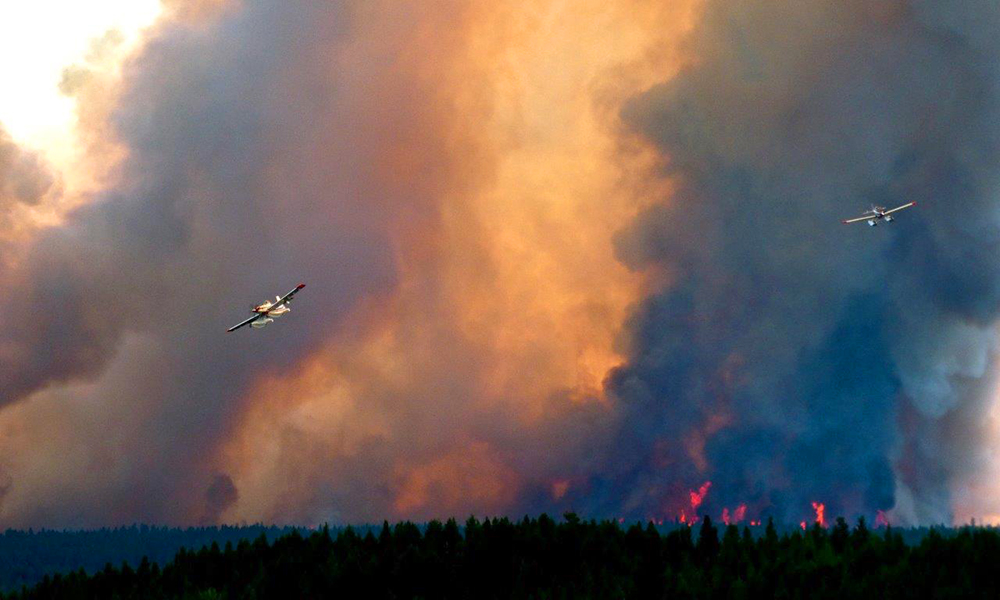 “Compromising a pilot’s physical or mental state can affect the whole team.”

Raging forest fires can move quickly across a valley, jumping roads and hurdling toward wildlife, houses, entire communities. In chaos, families grab their most precious belongings and flee out of the devastating path.

In the sky, another drama is unfolding—aerial firefighters descending to drop thousands of litres of water and retardant to diminish the fire’s fury. It is a tightly choreographed operation, which requires precision, experience and vigilance.

Aerial firefighting involves busy airspaces, reduced visibility and, in extreme cases, tornado-like firestorms. The stakes are high, but the fighters are composed and adhere to their procedures.

“Compromising a pilot’s physical or mental state can affect the whole team. We try to keep the drama out,” says Shane Adams, an aerial firefighting operator for Conair Group Inc. who works to coordinate the flight crew.

“If our approach (to the fire scene) is as low-key as possible, our stress levels will be too, and we will succeed in our mission of keeping the fire at bay and minimizing its impact.”

The summer of 2017 will be remembered as one of the worst wildfire seasons in BC’s history  |  More than 1.2 million hectares (nearly 3 million acres) were destroyed by 1,346 wildfires, almost 10 times the 10-year average  |  An estimated 65,000 people were evacuated and a state of emergency was in effect for 70 days, the longest in the province’s history  |  More than 4,700 personnel were engaged in fighting wildfires across BC with fire suppression costs estimated at over $564 million.

-Wildfire Season Summary (2017), Government of BC

About 45 per cent of Canada is forested and more than 8,000 fires occur every year, damaging an average of more than 2.1 million hectares (nearly 5.2 million acres), according to the National Forestry Database.

Aerial firefighting is a crucial weapon in containing these burns—holding or knocking down the blaze so that ground crews can completely extinguish them.

Pilots are elite multitaskers who understand the terrain and the effects of weather in close proximity to the fires, which can generate a lot of heat. The internal temperature in larger fires can reach 870 degrees C (1600F). Aerial firefighters learn to execute low-level flying techniques and have a firm grasp of fire control strategies and tactics.

“It is a well-established, procedure and protocol-driven affair that must remain professional. There is no room for a ‘yee-haw’ mentality.”

An important skill is the ability to concentrate and solve problems on the fly, so “fatigue can have a deleterious effect,” says Leigh Barratt, Project Manager for Conair. “In British Columbia, we have fires the size of large cities.”

Adams says a huge amount of mental power, and sometimes physical effort, is required to fly these missions: “If you are rested and your head is clear, the process is seamless.”

“We use machine capability and its mobility in three dimensions to solve the problem presented by fire,” he says. “It is a well-established, procedure and protocol-driven affair that must remain professional. There is no room for a ‘yee-haw’ mentality.” 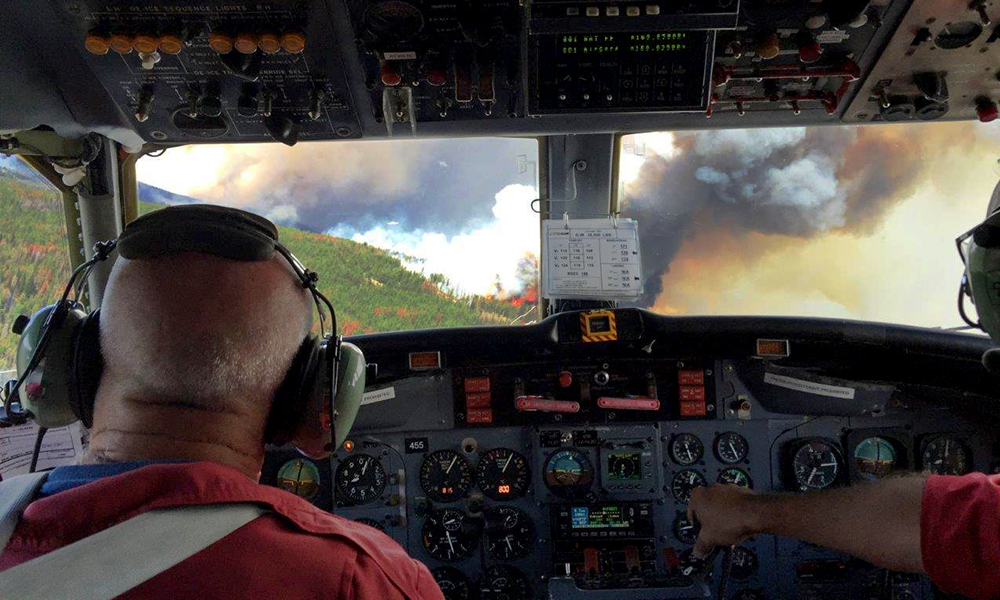 Pilot fatigue was on everyone’s radar, including Transport Canada’s, when they proposed new pilot flying regulations in 2015. The recommendations were derived from a model for commercial airline pilots.

Conair, along with the Consortium for Aerospace Research Innovation in Canada (CARIC), believed the regulations were incompatible with aerial firefighters’ duties and schedules. To make their case, they needed the expertise and insights of a research team.

Identifying the correct team to solve complex problems is what STAR does, and for this they engaged UBC Okanagan research teams in the School of Engineering, the Department of Computer Science, Mathematics, Physics and Statistics, and the School of Health and Exercise Sciences. Groups from Camosun College and Latitude Technologies, a Victoria-based flight data company, also contributed as the project took flight.

“This represents one of the most complex research projects to date at UBC Okanagan,” says Derek Gratz, associate director of UBC Okanagan’s University Industry Liaison Office. “It involves a diversity of expertise and the STAR partnership development team.”

Together, the collaborators evaluated aerial firefighter pilot fatigue and correlated it with performance.

When neuromuscular specialist Chris McNeil reached out to his UBC Okanagan graduate student Mike Kennefick about an industry project involving pilots and flying, the self-admitted airplane nerd couldn’t wait to get started.

Kennefick inherited his interest from his father, he says: “We would go to the airport and sit on the roof just to watch planes.”

Although this project would have to be balanced with his other research, Kennefick enthusiastically took on the work. 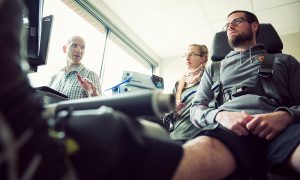 For both researchers, working with an industry partner was a unique and valuable opportunity. McNeil’s expertise lies in examining how the brain and spinal cord interacts with muscles, in particular how this changes with fatigue, exercise training, disease or aging.

“My research,” says McNeil, an assistant professor in the Faculty of Health and Social Development, “is largely mechanistic, so this project was appealing because it represents a real-world application with an opportunity for near-immediate impact.”

Evaluating fatigue was the first step of the research and McNeil became the coordinator of the entire project, overseeing grant applications, data collection, analysis and evaluation. Together with researchers from Camosun College, McNeil and Kennefick devised tests for cognitive and physical fatigue.

The researchers needed a tool that mimics the types of decisions pilots need to make while flying, so they developed an iPad application that assesses the pilot’s ability to visually scan a surface and react quickly.

“As a pilot, you want to perform operations smoothly,” says McNeil, adding that as our muscles tire, they become “wobbly.” McNeil’s fatigue test evaluated the ability of how well pilots could hold a steady bicep contraction and, similar to the iPad test, pilots were tested through the fire season.

“I love the interaction between private industry and academia, because it shakes up the status quo of how we see university research.”

For Kennefick this meant summer-long road trips, from one firebase to another. Although this took him away from his lab-based work, it was an added bonus for the outdoor enthusiast, who talks excitedly about his side trips fishing and camping. However, as the fires spread, so did the frustration of finding pilots. Road diversions and changes of pilot availability were daily realities. New tactics were required.

“Because recruitment and commitment of the pilots was not always straightforward, I needed to problem solve and build relationships,” he says, adding it was well worth the effort. As data was collected, new friendships were formed.

“I love the interaction between private industry and academia, because it shakes up the status quo of how we see university research.”

Kennefick is thankful for the funding from Mitacs, a national not-for-profit organization that helps to support research internships shared between industry and academia. Funding and support from CARIC, the Innovation in Wellness Fund, and the National Sciences and Engineering Research Council (NSERC), focused on industry-partnered research, was also integral.

How fatigued do aerial firefighters get? The answer is not easy to measure. Data was collected over two years, which included telemetry (remote measurements) from the plane, and pilot reasoning and physical ability.

“Our testing didn’t find much evidence of fatigue at all,” says McNeil. “Additionally, there were no obvious errors in flying.” This is noteworthy given the unique nature of the work with multiple lands and take-offs, complicated terrain and other aerial challenges, and the admittedly fatigued pilots.

“When we reflected on the data, it reinforces that the company (Conair) does a good job giving pilots adequate rest,” says McNeil. He adds that this is the first time a study like this has been conducted and says it would have been impossible without the support of UBC statistics professor Jason Loeppky and postdoctoral researcher Lengyi Han.

“When you pull in people with diverse interests to solve a problem you get different perspectives and some really interesting insights,” says McNeil.

Leigh Barratt suggests the data reflect well on the pilots, who are experienced and aware of the stressors involved. “They know their limits,” he says, adding Transport Canada is watching the project with interest, and that he hopes the data will lead to tailored regulations for this industry.

Kennefick says the pilots were also interested in the data and appreciated the research.

Although some of the data remains to be collected and analyzed, next steps are already underway. All of the information—from the plane’s telemetry to the pilot’s heart rate—is being assimilated into an algorithm to allow for a precise and tailored risk-management system. 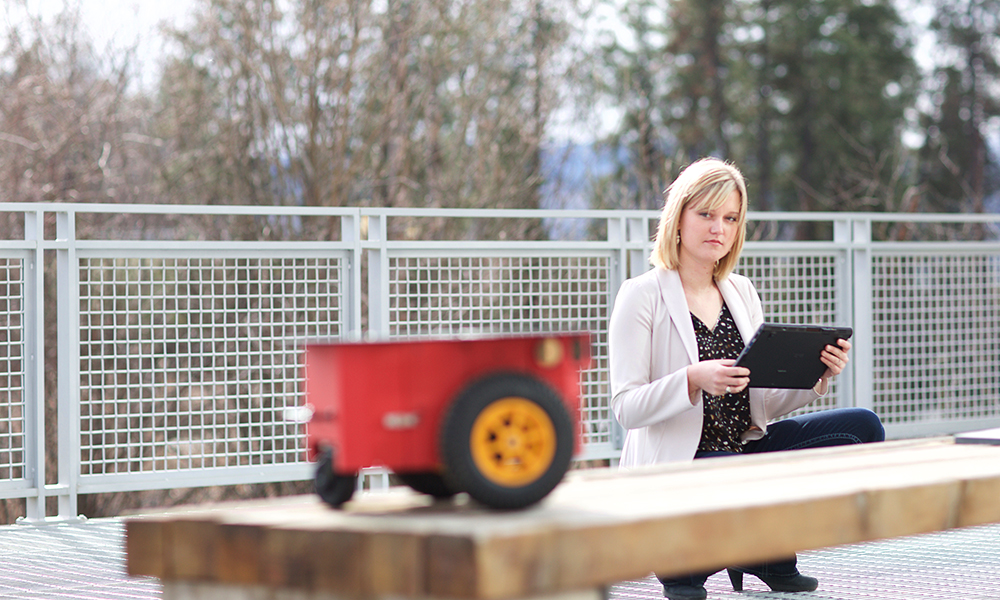 One of engineering Professor Homayoun Najjaran’s research interests is the development of algorithms used for complex problems involving human reasoning, such as driving. This approach can also be used to determine if a pilot is fit to fly.

“It is the same engine,” he says. “As engineers, we build the engines.”

The engineers had access to an enormous amount of data from Camosun, Latitude and Team McNeil. Najjaran admits, “Making sense out of it was the real challenge.”

As a little girl, O’Brien had an inquisitive mind and always sought to better understand the way things worked. In high school, she discovered a fascination with all things mechanical, through an automotive course. This ultimately inspired her to apply to UBC Okanagan’s mechanical engineering program. 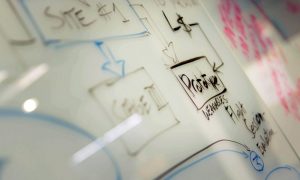 The origins of wearable technology that will monitor pilot stress and help determine when it’s time to return to base.

As an engineering undergrad, she met Prof. Najjaran and her research career began. NSERC Undergraduate Student Research Awards enabled her to work in Najjaran’s robotics laboratory during her summers.

Upon completion of her BASc degree at UBC Okanagan, O’Brien accepted a position at USNR, a manufacturer of lumber processing equipment. Then she received a call from Najjaran, who had just the project for her.

He was starting a new project, designing self-driving cars in his lab,”O’Brien says. The mixture of real-world applicability and leading-edge research was perfect for her. She packed her bags and moved back to Kelowna to join the team as a graduate student.

Najjaran and his team of engineers realized that fatigue is not an easily measurable parameter but it can dramatically affect pilot performance. The team is now working on sophisticated reasoning algorithms that combine expert knowledge together with data-driven knowledge to infer pilot fatigue level and predict a performance index over time.

O’Brien data-mined other factors such as flying time, sleep pattern, time spent “on alert” and stress during flying. Her goal is to relate workload to performance.

According to Najjaran, the ideal end-result tool will automate the decision process, determining if a particular pilot will fly certain types of missions, or even fly at all. Their system will also monitor pilot stress, and along with the mission lead, determine when it’s time to return to base. A sustainable system, it will also keep updating the data, including the level of performance.

“Our understanding of the project has evolved,” Najjaran says. “I’m proud of what we’ve done.”

For O’Brien the project has given her valuable experience. “It feels great to know I am making a difference in firefighting pilot safety,” she says. 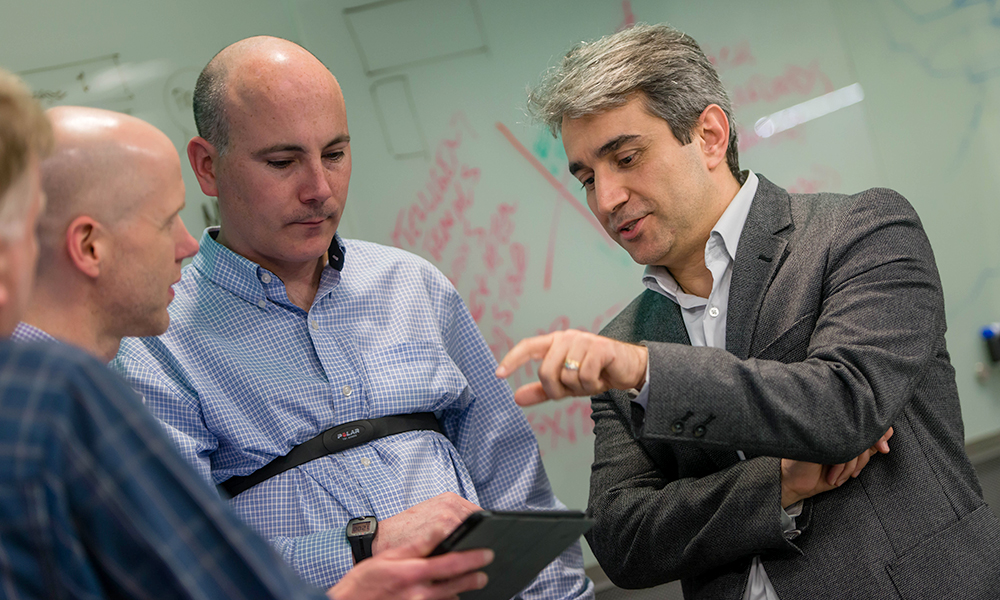 Interdisciplinary collaboration is key to UBCO’s research, which the UBC Survive and Thrive Applied Research (STAR) initiative helps to facilitate.