WHEN WE FIRST MET CASEY HAMILTON several years ago she was a Masters student balancing her studies with non-profit and community work.

Now, newly capped as a graduate of Interdisciplinary Graduate Studies, the UBC alumna has worked tirelessly to bring some of her non-profit ventures to fruition. With no interests in slowing down, Hamilton continues to advocate for secure food systems—a philosophy that is spreading roots beyond the Okanagan valley.

Hamilton’s vision is to eradicate poverty in the Okanagan, starting by advocating for society’s less fortunate. The key is finding ways to persuade charities, non-governmental organizations (NGOs) and governments to work hand-in-hand, dovetail resources, and proactively help people in need.

“I’m a passion-project person. It’s important to put your efforts where your heart is.” 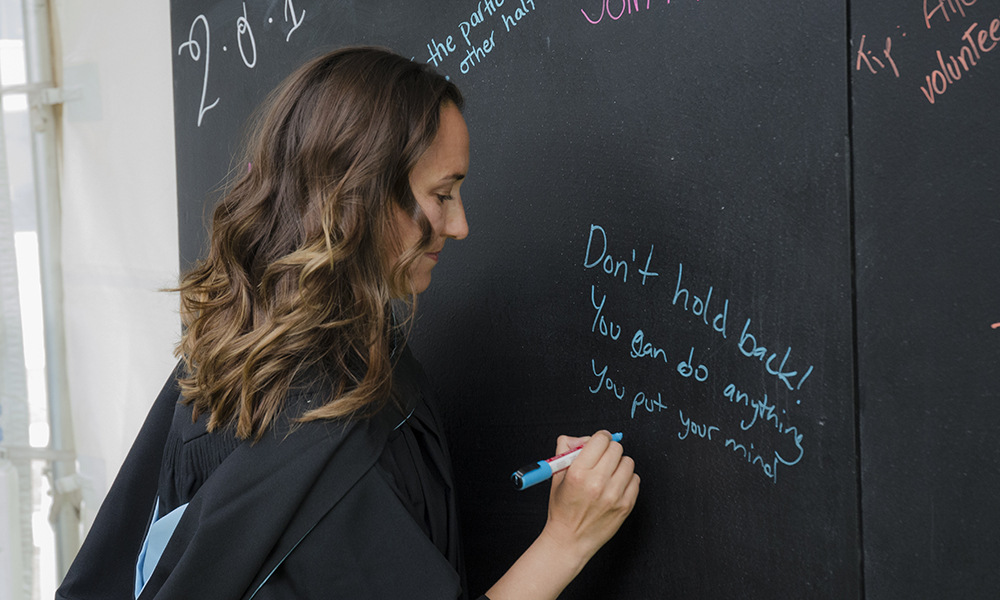 Casey Hamilton shares some thoughts during 2018 Convocation festivities at UBC Okanagan: “Don’t hold back! You can do anything you put your mind to.”

Waste Not, Want Not 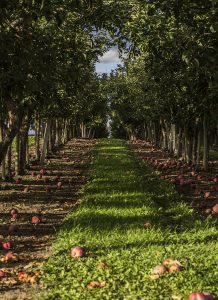 After earning her bachelor’s degree at UBC Vancouver in 2007 and becoming a Registered Dietitian, Hamilton moved to Kelowna and helped found the Central Okanagan Food Policy Council to bring NGOs together towards developing collaborative processes and actions.

“Instead of teaching people to eat healthy diets,” she says, “I want to work at creating environmental supports to live a healthy life. I want to take part in changing the system.”

In 2011, Hamilton started the Okanagan Fruit Tree Project, where she serves as its executive director. The goal is to turn backyard fruit trees into a valuable source of food for the community by harvesting otherwise wasted fruit. By providing healthy fruit for those in need, the organization promotes local food security and volunteerism.

“People feel more dignity when they harvest food for themselves and others versus when they access emergency food services,” says Hamilton.

The next step for the project is to organize value-added products, such as apple juice or other preserves that can be sold at a subsidized price.

“We are grant-funded at the moment, so we are just starting to look at ventures that will help us become self-sustaining,” Hamilton explains. “We are doing what we can with what we have.” 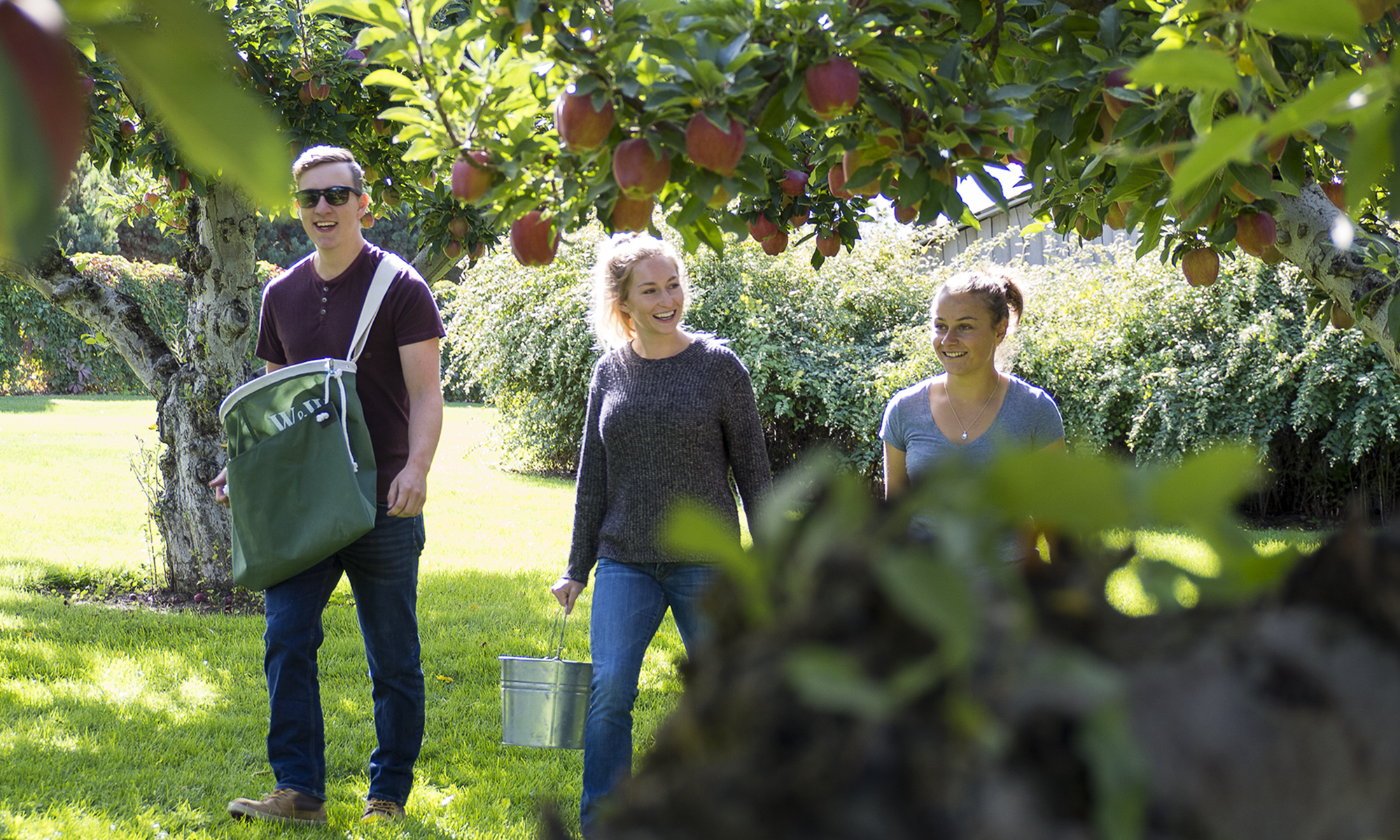 The focus of Hamilton’s MSc thesis was to understand how key stakeholders in the community are contributing to the evolution of urban agriculture and it’s related policies, using Kelowna as a case city.

Although “urban agriculture” sounds like a bit of a contradiction, Hamilton says it has become a common term and culture. Wide-ranging examples include private yard and community gardens, institutional and commercial initiatives, rooftop plots, and urban animal pens with chickens and rabbits.

Growing food in the city may seem trendy and new, but it’s actually a blast from the past—an old tradition that’s new again. From time immemorial, communities have grown around agricultural reserves such as grain silos; courtyards with flourishing gardens and livestock offered convenience and food protection.

Only in the last five decades have food and people grown apart. But now it’s all coming full circle. Many of us are hoeing, hatching and harvesting in the cities where we live.

“I grew to understand how urban agriculture contributes to a food secure community, and that a more robust local food system will facilitate a healthier community.”

Hamilton wanted to explore more about the implications of this movement. As part of her Master’s thesis, “Urban Agriculture Policy Community Kelowna” (May 2017), she gleaned insights from various stakeholders and individuals involved in urban agriculture policy.

“Most of the participants are involved with urban agriculture policy because they want to be part of a healthy and sustainable community,” Hamilton says. “They believe urban agriculture has the potential to foster a socially, environmentally and economically active society.”

Many of her connections agreed that urban agriculture should a priority for the City of Kelowna, which recently updated its agricultural strategy, placing value on urban agriculture and its contribution to a healthy city and its healthy local economy.

“Through my practical experience, I grew to understand how urban agriculture contributes to a food secure community, and that a more robust local food system will facilitate a healthier community.”

“It’s practical—it can be a catalyst for change and get the conversation rolling,” she says.

Higher education was not among Hamilton’s life plans. Growing up in poverty “on the wrong side of the tracks” in a single-parent family in Calgary was a tough and troubled existence.

Hamilton escaped into ballet, theatre study and art, yet still often found herself in the principal’s office.

“I never thought about going to university. When I arrived at UBC Vancouver, I started learning how the world works,” she says. “I didn’t know what to do or how to do it. But I discovered the possibilities.”

Hamilton is active in the UBCO and alumniUBC communities, much sought after for her mentoring skills and pragmatic advice, and recognized for her community efforts with the Okanagan Fruit Tree Project and Okanagan Food Policy Council.

“Really, it’s not about me,” Hamilton says. “I just saw a need and organized people to help.” 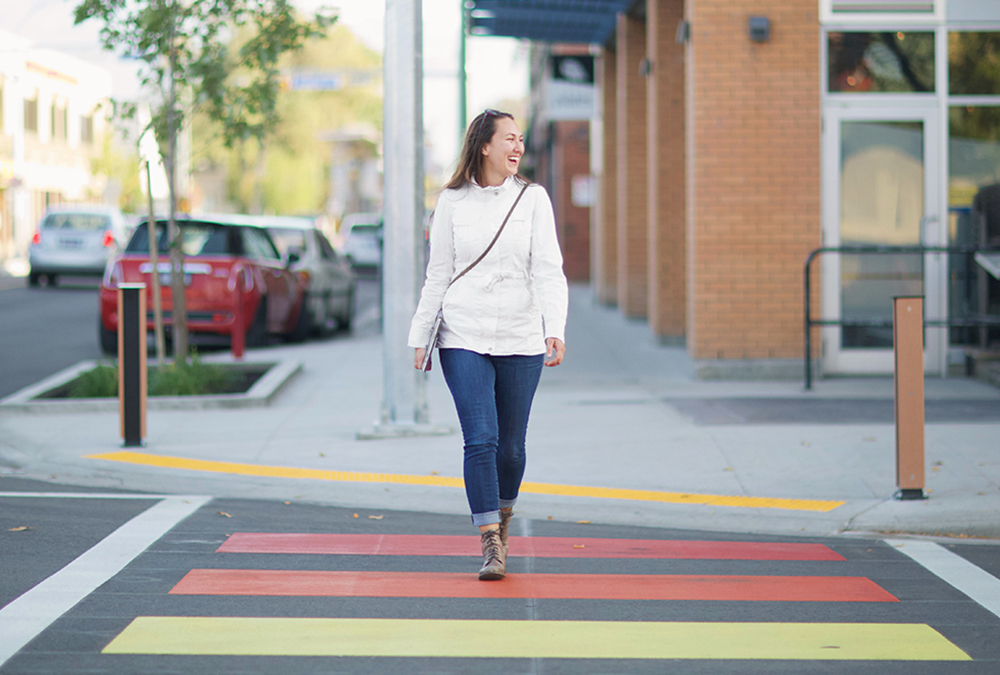 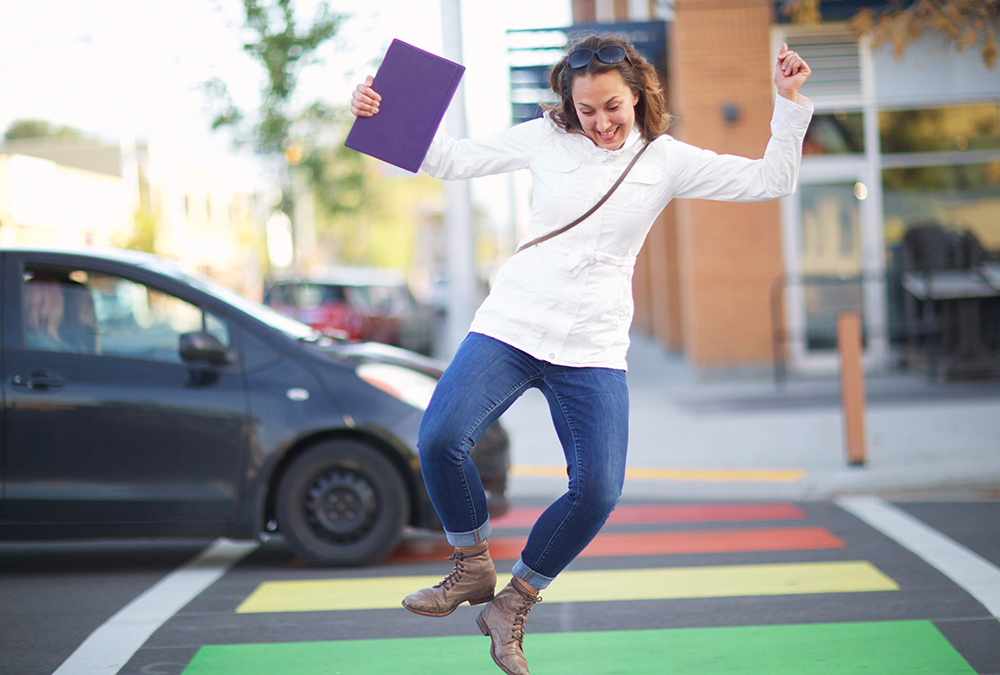 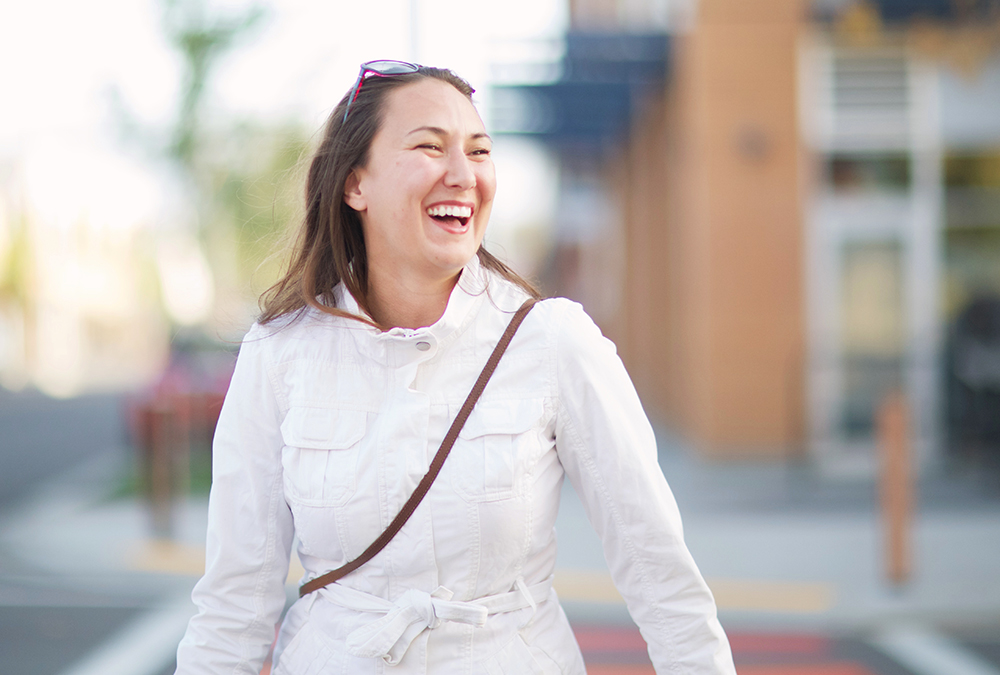 Hamilton’s vision and moxie fit right in at UBC’s Okanagan campus. Here, the hyphenate extraordinaire is also a Campus Health Specialist with Campus Health and Wellness, and a research coordinator with the Campus Health VOICE project. 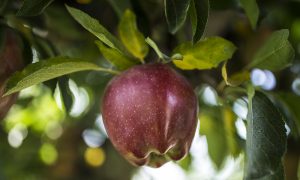 VOICE, now in its 12th year, aims to better understand the factors that influence campus wellbeing. The research involves data collection and analysis as well as engaging students, staff and faculty in workshops, action groups and health promotion activities.

“This work will lead the improvement of our campus, so it is healthier for all,” Hamilton says. “And happy students make for happy and more engaged professors.”

Other non-profits routinely seek Hamilton’s expertise for getting things done. She envisions her future as a social entrepreneur, influencing policy makers and building non-profit organizations into thriving, self-supporting enterprises.

“It just feels like the right thing to do. I follow my values,” she says. “I don’t segment my life. It all flows together.”