Supporting the revitalization of Nsyilxcn, the language of the Syilx Okanagan Nation, on whose territory UBC’s Okanagan campus is located.

In 2019, UBC Okanagan officially declared the campus’ Truth and Reconciliation commitments, one of which is to “develop and implement activities that support the revitalization of language fluency, including through initiatives such as …[s]ignage and wayfinding on campus which represents Okanagan language and culture.”

In 2020, the campus began an update of the street signs to make them more informative for the campus community and to foster understanding and learning of the Nsyilxcn language. The updated Nsyilxcn street signs were created in partnership with the En’owkin Centre and the Okanagan Nation Alliance (ONA). The new signs were installed in early 2022.

Translations: The Nsyilxcn translations are interpretations of the meaning or concepts communicated by the English street names. These updated translations were developed by the En’owkin Centre’s language keepers and speakers.

Design: The colour used on the street signs was chosen by the ONA and is inspired by the blue-green tones of Kalamalka Lake (“Kalamalka Blue”). The ONA’s logo illustrating the bear and salmon can be seen behind the Nsyilxcn translations. 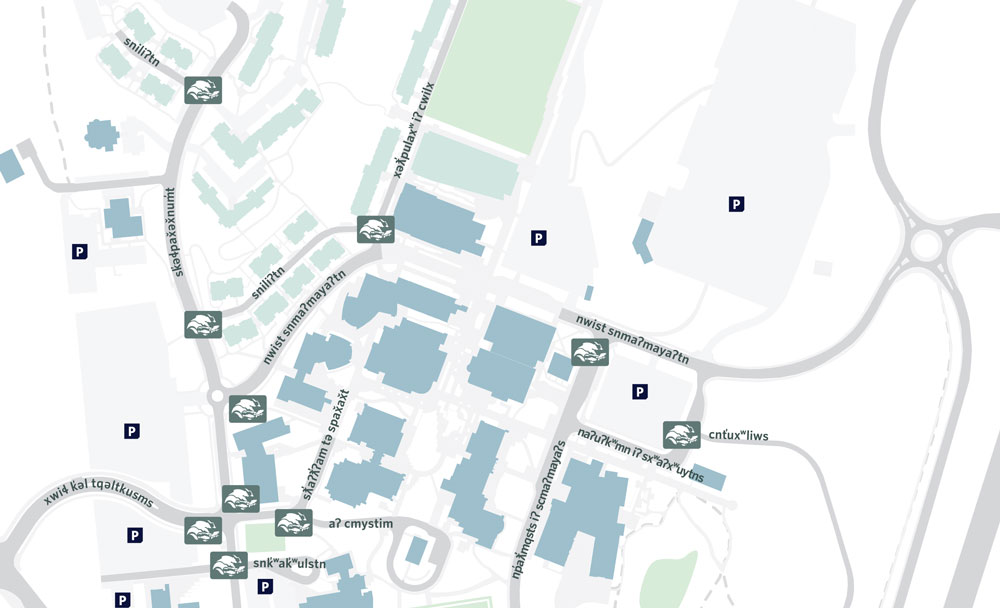 Learn about the Nsyilxcn Street Signs

Campus Planning is grateful for the support from the Syilx community in the street signs project and for the guidance of the Okanagan Nation Alliance and En’owkin Centre, including Harron Hall, Tracey Kim Bonneau, and Maria Baptiste.

We acknowledge that the UBC Okanagan campus resides in the traditional, ancestral and unceded territory of the Syilx Okanagan Nation.